One of the highlights of our jobs, as Michigan driver’s license restoration lawyers, is the first communication we have with a client after he or she has been notified that they’ve won their license back. Our firm guarantees to win every license restoration and clearance appeal case we take, so for us, this is something that we get to do all the time, but sharing this moment never gets old, and it’s always nice to be part of someone’s well-deserved celebration. 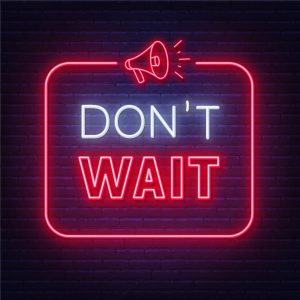 One of the more important things we tell our clients during that post-victory conversation is to make sure they follow through with getting their full license back as soon as possible. This article will focus on why doing that is so important, and will look at some of the problems that often occur when a person waits longer than necessary to get his or her full license. To be clear, this only applies to Michigan residents who win a restoration of their Michigan driver’s license. Non-residents are only eligible to win a clearance of the Michigan hold on their driving record so that they can get a license in their new state.

In an article published a few months ago, I explained that well over 99% of all Michigan residents who win a restoration case will have to start out on a restricted license, and with an ignition interlock. In the real world (or at least in Michigan), when a person who has lost his or her license for multiple DUI’s does manage to win it back, he or she will almost certainly have to drive under restrictions and with an ignition interlock unit for a full year. After 12 months, he or she can, and as the point of this article will make clear, absolutely should then file for a “full” license.

When a person who has been on an interlock and restrictions goes ahead and files for a full license, he or she is seeking what is technically called a “change and removal of restrictions.”

Beyond just making the point that a person should go for a full license as soon as he or she is eligible, the reader should understand that, not only is there absolutely NO benefit to waiting longer than the minimum period of time to do that, but, as noted above, there are serious risks to waiting, and lots of people wind up finding this out the hard way.

The goal of this article is to help prevent such problems, and what really inspired it.

Unfortunately, our firm is regularly contacted by people who, after having won an in-state driver’s license restoration appeal some time ago, don’t move quickly enough to get a “full” license when they became eligible, and then find themselves facing an ignition interlock violation.

Interlock violations suck at any stage, but the whole situation is even worse when it happens to a person who was already eligible to get rid of the unit, but simply didn’t. We’ll look more closely at the most common kinds of violations in the second installment of this piece.

Ignition interlock violations are more of less a fact of life when a person is required to use one of these devices. Our firm handles lots of them. However, even though we’re in business to make money, my team and I don’t like to see any person who could have (and should have) been off the interlock wind up getting a violation that could have been avoided had he or she simply not waited.

This is why we tell all of our clients:

DO NOT WAIT A DAY LONGER THAN YOU HAVE TO IN ORDER TO GO FOR YOUR FULL LICENSE AND GET OFF THE INTERLOCK AND RESTRICTIONS.

The only things that can happen by waiting are bad things.

To put this another way, if a person waits longer than the year he or she is required to drive that first year on the interlock and with a restricted license, the only possible “good” thing that can happen is that no bad things happen.

There is absolutely ZERO benefit to remaining on the interlock longer than one has to in order to file for a “full” license. Indeed, if a person waits long enough, something is almost sure to go wrong; it’s simply a matter of time.

Sometimes, a client will explain his or her delay in moving forward by saying something like, “I thought the longer I was on it [meaning the interlock and the restricted license], the better it would look.”

Nope. Not at all.

In fact, if a person waits too long, a hearing officer may ask why, wondering if the person felt he or she needed the interlock as some kind of disincentive, or security device, to keep him or her from drinking, or drinking and driving.

Remember, under Michigan’s driver’s license restoration rules, in order to win a license appeal the first time, a person must prove 2 things, by what the law defines as clear and convincing evidence: First, that his or her alcohol problem is “under control,” and second, that it is “likely to remain under control.” I’ll explain what they really means shortly.

It’s important to understand that, in Michigan, anyone who has had his or her license revoked for multiple DUI’s is legally categorized as a “habitual alcohol offender.” A key implication of this categorization is that every such person is also presumed to have an alcohol problem.

This means that anyone who has to go through the license appeal process is seen as having a drinking problem of some sort.

Moreover, the written law is interpreted as having drawn a very bright line in the sand: Only those people who can prove they are a safe bet to never drink again will be allowed back on the road.

The Michigan Secretary of State, for its part, knows that people who do not drink are zero risk to drive drunk, so these are the only people considered eligible to win their licenses back.

To prove that his or her alcohol problem is “under control,” a person first must demonstrate that he or she has been completely alcohol-free for a legally sufficient period of time. The exact amount of time necessary can vary from case to case, but in our practice, we generally require a person to have been completely abstinent for at least 18 months before we’ll move forward.

The second requirement of the law is that a person must also prove that his or her alcohol problem is “likely to remain under control.” This is very relevant when going for a full license.

Essentially, “likely to remain under control” requires proving that a person has both the ability and commitment to never drink again.

The takeaway from all of this is that the key to winning a license appeal is removing all doubt that one has quit drinking AND that he or she fully intends to “stay quit,” and live a sober lifestyle.

Thus, anyone filing for a full license after having spent a year on the interlock is going to have to prove that, in addition to whatever previous period of sobriety he or she established as part of their original appeal, they have also remained alcohol-free since that time, and remain firmly committed to never drinking again.

After winning an initial license appeal, if it is discovered that a person has consumed any alcohol whatsoever, for any reason, not only will his or her license be taken away, but he or she will have to wait a long while to even try and get it back.

Whenever he or she does file another license appeal down the road, winning back the privilege to drive will be a difficult task.

When you think about it, the very idea that a person would need, or would otherwise even think about using the interlock unit in some way to prevent themselves from drinking is really contrary to any claim that he or she is genuinely sober.

Anyone who needs some kind of testing device as a security measure to keep him or herself from consuming alcohol is definitely not sober. They may be abstinent, but they are far from having embraced any kind of true sobriety.

Remember, nobody wins a license appeal cases unless he or she proves to the Michigan Secretary of State that they haven’t had a drink (or used drugs) for that “legally sufficient” period of time, and that they’re also a safe bet to never drink (or, for that matter, use marijuana) again, by clear and convincing evidence.

If the original hearing officer had any doubt whatsoever about either of those things, the person wouldn’t have won his or her restoration case in the first place.

That said, in addition to considering the evidence in the new case seeking a full license, the hearing officer deciding it (often a different hearing officer than the one who was assigned to the first case) will also look back at the person’s prior appeal, and he or she must have no doubt about any part that, as well.

As an aside, when a person does file for a full license, it is completely within the hearing officer’s power to deny the appeal and either take their license away completely, or keep him or her on a restricted license with an interlock for an additional period of time.

And if I haven’t made my point yet, then I’ll add this to the mix: Staying on the interlock longer than the required year does NOT help one “look good.”

Ann, our senior assistant, puts it something like this: “When your probation was up for any of your DUI’s, did you volunteer on to stay on longer to make it look good?”

The kicker, though, is that all of this become academic if someone picks up an ignition interlock violation before getting a full license, and that happens WAY more than the reader might imagine.

We’ll stop here, and come back to complete our discussion in part 2.