Within our roles Michigan DUI and driver’s license restoration lawyers, we are frequently asked something like “How much do you charge?” or “How much does this cost?” The subject of fees is always treated like a big secret by most lawyers and law firms – but NOT for us! We are the ONLY firm I know of that publishes our fees online. Having done this for more than 20 years, I simply cannot understand why nobody else lists their fees, or why, for so much of the legal world, prices are simply not disclosed up-front. 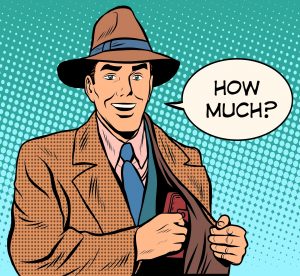 My team and I truly believe that how much you’re going to have to pay for something should always be clearly stated, and legal fees are no exception to that. There is absolutely NO good reason why a person should have to wonder, or wait to ask, how much a lawyer is going to cost for a particular case. Of course, there are reasons why some lawyers are coy about the whole subject of money, but none of them are good, and only serve them, and not the people paying them. The whole “hush-hush” attitude surrounding what a lawyers charges never benefits the client – ever.

There are 2 primary reasons why lawyers don’t disclose their fees up front: The first reason is a general fear of “scaring off” a potential client in the belief that it’s better to establish a rapport with someone before talking money (and legal fees aren’t cheap). The second reason is more nefarious, and is based on the tactic of “feeling the client out” in order to learn what he or she can (and is willing) to pay, and/or what fees he or she has already been quoted and then figuring out how much to ask for in order to “seal the deal,” so to speak. Thankfully, our firm doesn’t use those gimmicks – or any others, for that matter.

To begin, I should point out that my team and I are not in competition with anyone else regarding price, or the level of service we provide. Obviously, like anyone providing goods or services we want to at least be somewhere “in the ballpark” with what we charge compared to others, but our interest in what any other lawyer costs ends there.

Specifically, want I mean is that you wouldn’t last long as a baker, for example, if you charged $25 for the same loaf of bread that runs about $5 everywhere else, nor would you make it as a dentist if you charged $20 for a cleaning that normally runs about $150 at every other dental office, especially if each one takes about 60 minutes, and your hygienists earns $40 an hour.

Beyond that, however, our office has never worried what anyone else charges: We know that our fees are higher than many, and lower than some, and we’re fine with that.

Just like we’re different for listing our prices online, we’re also different in other ways, too:

Our license appeal practice is nation-wide, and we guarantee to win every Michigan driver’s license restoration and clearance appeal case we take. We are very open about the fact that we make our money winning these cases before the Michigan Secretary of State the first time around, rather than by losing and then having to do the whole thing all over again, without charge, as “warranty work.”

By contrast, in our DUI practice, instead of taking cases all over the place, we limit the geographic area of our work to the courts of Greater-Detroit (meaning Wayne, Oakland, Macomb, Lapeer, Livingston, St. Clair and Washtenaw Counties) so that we can sell our repeat experience producing the best results possible in a smaller circle of courts we get to regularly.

While those things are important, and account for why our firm charges what it does in driver’s license restoration and DUI cases, the main point I’m driving at is that we’re upfront about our costs, and that our fees are published online (and in multiple places, no less).

By contrast, everybody else conspicuously avoids the topic of fees. I’ve never heard of any other legal website that lists them, and the time for that to change seems long overdue.

Now, let’s circle back to the 2 main reasons other lawyers don’t publish their charges, like we do.

First, there is the idea that a potential client might be “scared off by talking money. While that’s seems understandable to a certain extent, if you think about it for a moment, you’ll realize that it’s also very much misplaced, because the subject of cost is going to come up sooner or later anyway.

Let me explain what I mean by way of an example involving a hypothetical 1st offense DUI charge:

Image that DUI Dave is calling around for a lawyer after his arrest for a 1st offense OWI (Operating While Intoxicated). Dave has never had to hire a lawyer before, and has no clue what legal fees run, other than the vague notion that they’re “expensive.”

Dave’s first call is to a low-budget, cut-rate law firm. The person who answers the phone is not very friendly nor helpful, and never mentions price until he finally asks, “how much is this going to cost?” Only then does he find out that the firm would charge $2600 for his case.

Shocked at what he then thinks is a very high price, Dave quickly ends the call, and starts contacting other lawyers.

Next, Dave calls Bargain Brenda’s Law Office. Brenda is much nicer, and spends some time talking with Dave. When he finally asks about her costs, she tells him that her fee would be $5400 for his case. Dave is even more freaked out about the money, so he decided to do more checking around.

As he does that, Dave soon realize that at $5400, Brenda was, in fact, a bargain, and that something must be really wrong with the cut-rate firm he contacted first, and it probably has to do with their obnoxious attitude.

Although some lawyers aren’t willing to talk money unless Dave “comes in,” or at least does a FaceTime or Zoom consultation, those that do disclose how much they charge start at $4000 on the low end, and go all the way up to $10,000.00 on the high end.

Dave is not happy, but he is coming to grips with the idea that “expensive” means a lot more than he originally thought.

Unfortunately, he hasn’t been keeping notes as he’s been calling around, and he can’t remember Brenda’s name, or anything other than he wishes he would have written her information down somewhere, because she was very helpful, and as he thinks about it, he’d rather pay $5400 for her than $2600 to the rude law office he spoke with first.

For everything else that can be said about his lawyer shopping fiasco, Dave might just wind up having to make a few appointments with some of the operations that wouldn’t talk about price over the phone, and thereby have to waste even more of his time.

I truly believe that this whole way of doing things is just total BS. Nowadays, you can literally buy a car online (a lot of people do), and you can find out how much it costs to buy the most obscure product you could ever imagine and have shipped from the most far away place on earth to your front door, all with a few clicks, but you can’t find out, up-front, what a lawyer is going to charge for a local DUI case?

Personally, I would hate to go through the same kind hassle as Dave, and that’s why my team and I won’t do that to anyone else.

Do you want to know how much we charge? You don’t even have to ask; look at our “Fees” section.

If our firm has “lost” any potential DUI or driver’s license reinstatement clients by publishing our fees, then they were either people Hell-bent on finding some cheap lawyer, or otherwise not sharp enough to figure out how to protect themselves from being bamboozled.

Either way, they’re probably better off with whatever other lawyer they chose over us….

I say this all the time because it’s worth repeating: There is simply no good reason to NOT be a wise consumer, check out your options, and compare lawyers.

We’ll stop here for now, and then pick up, in part 2 by looking at the second primary reason lawyers are secretive about their fees, and don’t disclose them up front.