In part 1 of this article, we began looking at the subject of legal fees in Michigan DUI and driver’s license restoration cases. I pointed out that there are 2 main reasons why lawyers are so secretive about how much they charge, and we looked at the first of them – the idea that it’s better to establish some kind of relationship with a person before talking money. However successful or not such a tactic may be, I strongly believe that it’s better for a lawyer to be upfront about costs. Thus, our firm is the only practice I know that publishes its fees online. 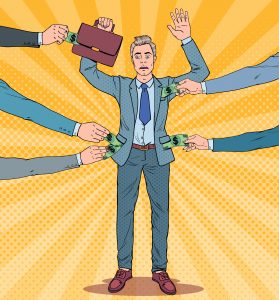 In all candor, I think that’s a shame. As I said before, whatever business advantage or strategy some lawyer may think there is to avoiding the topic of money, absolutely none of that benefits the consumer. Right now, the words “transparent” and “transparency” are popular, and I can think of no place where they are more relevant than letting someone know how much something is going to cost, especially when it comes to hiring a lawyer. This ties into another thing our firm does differently, and that’s suggest that anyone looking for a lawyer take the time to really look around. The fact is that there is simply no downside to being a wise consumer.

This brings us to the second reason fees aren’t disclosed up-front by lawyers, and it really grows out of the first that we discussed in part 1 of this article. Beyond just not wanting to “scare off” a potential client right out of the gate, by talking money, a lot of lawyers are afraid they’ll quote a fee that’s either too high, or, more commonly, below what they’d otherwise be able to get if they dig around a little bit and “feel out” or explore what a potential client is able and willing to pay, and what he or she has been quoted so far. Many years ago, an older lawyer explained the technique to me like this:

When interacting with someone, he’d make it a point to ask a few key questions in a very casual way in order to find out what kind of money the person was making. Here’s an example of how that might play out in the context of a consultation about a DUI charge:

Imagine that Tipsy Tina was arrested for drunk driving and is calling around to attorneys for help with her DUI case, and is on the phone with the Lisa the Lawyer. Having already exchanged some preliminary info about Tina’s pending OWI (Operating While Intoxicated) charge, we’ll join their imaginary conversation while it’s in progress:

Lisa the Lawyer: In what city were you arrested?

Lisa the Lawyer: Okay. It helps for me to get a little background. Are you employed, a student; what do you do for a living?

Lisa the Lawyer: How long have you been there?

Tipsy Tina: For about 7 years now.

Now, the Lisa the Lawyer knows from this that Tipsy Tina is far from broke, and earns a good living. Lisa may ask a few questions to see what kind of prices Tina has been quoted so far:

Lisa the Lawyer: Have you talked to many lawyers yet? Have you been quoted any fees or anything like that?

Tipsy Tina: Yeah, I talked to [So-and-So] and he said his retainer was $7000. I have an appointment with him on Thursday, but I wanted to call around before then just to see.

At this point, Lisa, who would normally charge about $5000 for Tina’s kind of case, has several options:

1. She can try to “upsell” herself and quote a fee slightly higher than [So-and-So’s] (probably not the best idea),

2. She can quote an identical fee, hoping that Tina likes her more than [So-and-So], or,

3. She can undercut [So-and-So’s] fee by a decent chunk (“I’d charge $6000 for your kind of case, and, to be honest, I think that $7000 is just too high”) and still bring in more money than she would have gotten otherwise had she first told Tina that she normally charges $5000.

Whatever else, though, knowing that Tina is gainfully employed and makes good money is valuable information for Lisa.

Let’s switch a few details in the conversation and change a few things so it plays out like this:

Lisa the Lawyer: In what city were you arrested?

Lisa the Lawyer: Okay. It helps for me to get a little background info. Are you employed, a student; what do you do for a living?

Tipsy Tina: I am laid off. My company shut down after Covid.

Lisa the Lawyer: Oh, that’s terrible. Do you have any prospects?

Tipsy Tina: I hope so; my unemployment isn’t enough to make ends meet, and it won’t last forever, either. I’m working on a few job leads…

In this conversation, Lisa the Lawyer knows that Tina has no money to spare, and that even if she has someone who will help her out with legal fees, cost is going to be an important part of her hiring decision.

Let’s fast forward a bit, and jump back into their conversation a little bit later:

Lisa the Lawyer: Have you been checking around with other lawyers? Is there anything I can answer for you that they didn’t, or anything you want to “compare notes” about?

Here, Lisa the Lawyer does some quick calculation, and, because she could really use the money right now, it would be worth it for her to take the case for $45000.

This is when Lisa will want to close the deal, and she’ll likely try to “set something up” with Tina.

If Tina doesn’t book an appointment or otherwise retain Lisa over the phone, and, instead, calls around, you can imagine pretty much the same conversation with another lawyer who may very well do exactly what Lisa just did regarding price, and quote a fee of $4000, thereby undercutting Lisa.

And so it goes.

The end result its that either Lisa will keep digging until she finds the cheapest DUI lawyer she can, or, at some point, she’ll know that she’s just talking to desperate-for-business, cut-rate attorneys who are starving for work and whose financial desperation far outweighs any experience or skill they’s bring to her case.

By publishing our prices, our firm avoids all of that.

I hate those kinds of games, and as much as I’d never want to be “played” that way, I have no heart to do it to anyone else, either.

Yet for as nice and honest as we are, there is also a selfish motive at play in publishing our fees, and it works to our advantage.

Although plenty of people miss the “Fees” section on our website and this blog (most likely because nobody expects anything like that to be there), having it published does help cut down on us having to waste time with people who are, in fact, hunting around for a bargain lawyer, or who otherwise have a talent for complicating their case.

I noted at the outset that my team and I don’t compete with anyone else in terms of fees, and we certainly have no interest in trying to be the low-bidder in any case we take. Anyone looking for the “best price” won’t get it with us, but will inevitably find it with lawyers who think that their best skill is having the best price.

We are the ONLY firm to lists our prices and guarantees to win every Michigan Secretary of State license appeal case we take.

With our guarantee, you won’t need to be lucky.

Of course, there could be other reasons why some lawyers are hesitant to talk money, including the fact that, historically speaking, the subject has simply never been “out there.”

However, that was then –  and this is now. It’s 2021, and we’re a few decades into the information age, so that old-school way of doing things is just plain obsolete.

None of that changes the fact, though, that most lawyers are secretive about fees for the 2 main reasons we noted above: Trying to get “chummy” with someone to win them over before talking money (and potentially scaring them off), and trying to “feel out” what they can and/or are willing to pay, or to get an idea of what fee to quote based on the prices the person has already obtained.

Our firm doesn’t use such tactics. You don’t even have to ask what we charge because we publish our fees, but anyone who misses that can certainly have a direct and prompt answer. Our fees are fair, based upon the concentration of our practice in DUI and driver’s license restoration matters, and the extensive experience and skill we bring to each and every case we do take.

We do all of our consultations by phone, and, an important part of our approach is suggesting, as I’m doing here, that everyone be a wise consumer, call around, compare lawyers, and then feel free to call us back.

In a very real way, this all comes back the Golden Rule, because we make sure we treat everyone the same way we would want to be treated.

If you are looking for a lawyer for a Michigan DUI or driver’s license reinstatement case, make sure you do, in fact, explore your options. Read around, and see how lawyers address the driver’s license restoration or DUI process, and how they explain their various approaches to these kinds of cases.

All of our consultations are free, confidential, and best of all, done over the phone, right when you call. My team and I are very friendly people who will be glad to answer your questions, explain things, and even compare notes with anything some other lawyer has told you.