If you’re currently facing a Michigan DUI charge, there is a decent chance that you’ve had your blood taken following arrest. It’s also quite possible that either you also provided a breath test sample, or, in some cases, were just never asked to provide one, and the police went straight for a blood draw, instead. This marks a change from how things used to be done, before Coronavirus arrived. Up until early 2020, if you were arrested for drunk driving, it was very likely that you’d be given a formal breath test at the police or sheriff’s station. Things are different, now, however, and the explosion of blood draws have really slowed the progress of DUI cases into the court system. 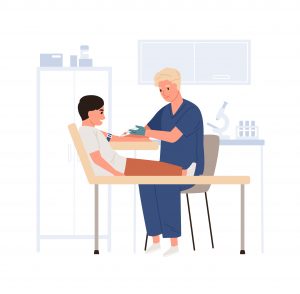 Until the Coronavirus pandemic hit, about the only time anyone ever had blood taken was if he or she refused to provide a breath test, and the police had to get a warrant for a blood draw. In fact, when someone contacted us and indicated that his or her blood was taken, it pretty much always meant that he or she had refused a breath test. That’s no longer true, and, as of this writing, blood tests are every bit as common, if not MORE common, than breath tests following a DUI arrest, at least here in the Greater-Detroit area, where my team and I concentrate our drinking and driving practice.

One of the most important consequence of this is how it impacts the timing of a DUI case. Blood samples have to be analyzed at a Michigan State Police Crime Lab, and those labs are backed up now more than ever. To be sure, the crime labs have always been busy, but with the recent addition of thousands of blood samples that need to be examined, the backlog has really grown. My team and I deal with this every day, particularly when people call us about a recent DUI arrest. While our first question to any caller is almost always about where the case occurred, our next question usually is, or at least was something like “what were your breath test results?”

Nowadays, we still ask potential clients about their BAC results, but we also know that, many times, those callers will not actually know the answer. This creates an inconvenience of sorts, as knowing a person’s bodily alcohol content (BAC result) is important in many ways. Among them are 2 that are very important:

First, under Michigan’s OWI (Operating While Intoxicated – the actual, legal term for what everyone just calls a “DUI”) law, if a person’s BAC result is .17 or greater, then he or she can (and usually will be) charged with the more serious “High BAC” or “Super-drunk” offense.

Second, it’s just a fact that prosectors are generally less inclined to negotiate a plea bargain when a person’s BAC result was really high. No matter what, lower is always better.

Without knowing someone’s BAC result, it’s hard for us to provide a super-accurate analysis of how things are likely to play out for him or her, and that’s something we’re used to doing. That’s not to say we can’t provide a rather good general idea of what’s going to happen, but when we know where a case will be brought and the actual BAC result from a person’s breath or blood test, we can almost always provide an extremely good best-case and worst-case overview.

The way it usually works is this:

Someone calls us and explains that he or she is looking around for a lawyer after a DUI arrest. We typically first ask the person where he or she was arrested because, unlike our driver’s license restoration practice, which is state-wide, our DUI practice is concentrated in Wayne, Oakland, Macomb, Lapeer, Livingston, St. Clair and Washtenaw Counties.

Next, we’ll ask the person about his BAC result.

With those 2 questions, we can quickly determine if the case is going to be decided in a court where we practice, and how easy or tough things are likely to be there.

If a person is arrested in one of the more “understanding” (i.e., lenient) courts with a BAC that’s not through the roof, then no matter what else, he or she is in for a smoother ride than someone whose BAC was sky-high, and whose case is in a court know to be less “flexible” (i.e., tough).

That’s the easy analysis, but in the real world, things often aren’t so black and while. Just as often, we have to evaluate and weigh the difference between a higher BAC result in a more lenient court, or a lower BAC result in a tougher court, and everything in-between.

As I noted above, one of the things our firm prides itself upon is the ability to give a rather precise overview to someone of how things in his or her DUI case are likely to turn out. The fact that we are busy Michigan DUI lawyers who limit our practice to the same courts, so that we get to them again and again and again, helps us do just that.

Without a BAC result, we can’t be so ultra-precise, but instead must “ballpark” what we say, and speak more in terms of a range of potential outcomes.

It certainly can help if a person at least knows his or her result from the roadside PBT (preliminary breath test). Although those tests are generally not admissible precisely because they aren’t as reliable as a formal DataMaster breath test or a proper blood test, they’re usually good enough for us to at least get a good handle on how things are likely to turn out.

Normally, a person’s formal breath or blood test result will be somewhat close to his or her PBT result. There are a lot of things that can affect how similar or not the 2 results will be, but it’s unusual for a person to have a significant disparity between them. In fact, if there IS any significant disparity, it serves as an alarm bell to triple-check and investigate the accuracy of the Datamaster or blood test result.

Yet for as much as we can “ballpark” someone’s case without knowing his or her actual BAC result, what we can’t do – and this really sucks – is give an accurate idea of when his or her case will come forward.

There are a lot of variables to actually brining a DUI charge: When a blood sample is sent to the MSP crime lab for analysis, those results have to be sent back to the arresting agency.

For the most part (there are exceptions, but they fall outside the scope of this discussion, which focuses on what can be considered the “average” kind of case), DUI charges aren’t filed in court until the police get the results back and then decide on a charge, as that determination will usually depend on those results.

Thus, if Staggering Sally blew a .17 at her roadside PBT, the police will likely wait for her blood test results to make sure that a “High BAC” charge is proper. If it turns out that her actual result is .15, then the more serious charge won’t hold, and she’ll be charged with regular OWI. However, if her blood analysis comes back at .18, then she’s going to be facing a High BAC charge, instead.

Beyond the backlog of samples the MSP has to test, anyone arrested for a DUI is also at the mercy of the arresting agency to process those results once they get them back, and then send the information on for formal charging.

Sometimes, a case gets overlooked for a while.

Other times, a case can be forgotten or lost entirely. That actually does happen, especially with blood tests, which take time to come back, rather than breath tests, where the results are immediate.

Most often, though, it’s a matter of about a month or two before the blood test results come back and a DUI charge is made in court. We sometimes see cases take longer, but not that often.

Still, the new way of doing things has affected our old way of being able to sum up things up as quickly and accurately as we had become accustomed to doing. Now, in cases involving a blood draw, our “new way” is more general, because it has to be.

Whatever else, we are always glad to explore normal parameters of DUI cases with a prospective client. My team and I pride ourselves on our consultations. Indeed, we have such confidence in them that we ACTIVELY encourage anyone searching for an attorney to call around and compare us to any and everyone else.

If you are facing a DUI and looking for a lawyer, be a wise consumer and read around. Pay attention to how different lawyers explain the DUI process, and how they explain their various approaches and “takes” on it.

If your case is in the Greater-Detroit area (meaning in any court located in Wayne, Oakland, Macomb, Lapeer, Livingston, St. Clair or Washtenaw County), give us a ring, as well. All of our consultations are free, confidential and, best of all, done over the phone, right when you call.