In part 1 of this article, we began our examination of the arraignment in Michigan DUI cases.  Our purpose in this 2-part article is to look at what happens in the real world, and what a person going in for an arraignment can expect after a DUI arrest.  As I noted in the first part, not all drinking and driving charges require that a person actually go to court for the arraignment, and, as a DUI lawyer, I can waive (essentially meaning cancel) it in many cases so that my client doesn’t have to show up. 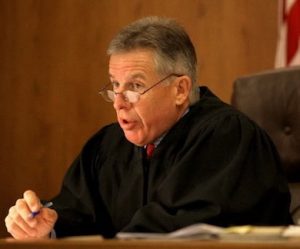 We learned, in that first installment, that the legal purpose of the arraignment is to inform a person of the charge or charges being brought, advise him or her of their constitutional rights, explain the various bond conditions, including that there is to be no drinking or drug use while the case is pending, set a bail or bond amount, if any, and then set up a “testing” schedule that will require the person to provide breath and/or urine samples at specified intervals to make sure he or she isn’t drinking or using any drugs.

In this second part, we’ll begin by looking at the standard conditions of bond that apply in every DUI (and every criminal) case in Michigan, and then we’ll move on to look at the testing requirement.

In fact, even when 1st offenders were put on probation, it was common for a Judge to only order, as a condition of probation, that a person not drink and drive.  In other words, Judges didn’t order that a person not drink, just not drink and drive.  Then, as social attitudes toward drunk driving evolved, it became common for Judges to order that, while on probation, a DUI offender not drink at all.  Back then, compliance was checked by “random” PBT and urine tests, and those were most often administered when a person would report to his or her probation officer.

It was a later idea to require that anyone arrested for a DUI and waiting for his or her case to come up be required, as a condition of release, to not drink.  It didn’t take long, as the whole testing industry began to boom, to thereafter ensure compliance with an order to not drink while on bond by requiring regular testing, as well.  Slowly but surely this practice has spread throughout the Detroit area and has now become standard operating procedure.

Before getting on to the testing conditions of the bond order, the Judge or Magistrate will either specifically outline the other legal conditions of bond or simply apprise a person that those conditions are on the bond form that he or she has received, or will receive, before leaving court.

Unless otherwise specified on the record in open court, the standard terms and conditions of every bond order in Michigan (for every criminal case, not just DUI charges) always include that the person agree to the following:

Once this part of things has been handled, the court will get to the issue of alcohol and/or drug testing.  As I promised earlier, we will skip any discussion of the reasons for – or reasonableness of – alcohol testing as part of a bond condition.  As my astute wife often points out when I start complaining about a situation, “It is what it is.”  What is relevant here is to note that the requirement of alcohol testing as a condition of bond is a growing phenomenon being used by almost every local court nowadays.

When it first made an appearance in the Detroit area a number of years back, it was only used in a few places, and although the practice did not immediately spread like wildfire, it was hard to miss the writing on the wall.  Today, and as I mentioned above, it is used by an overwhelming majority of local courts to ensure compliance with the requirement that a person on bond in a DUI case does not consume any alcohol.

Does the requirement of being ordered to not drink while a DUI case is pending, and being required to go to and pay for testing, seem to turn the whole ideal of “innocent until proven guilty” on its head?  How about having to prove, on your own time (but at some else’s beckon call) and at your own expense, that you have not had a drink?  What do you think?  And here’s the kicker:  Whether we like it or not, it is what it is.

It couldn’t matter less what you or I think, nor how inconvenient testing may be.  After all, you do not have to test; you are free to refuse.  However, in order to remain out of jail in any DUI case where testing is a condition of bond, you’ll have to comply with it.

Although testing is never really “convenient,” most Judges will work with people so that testing can be done without ruining their lives or interfering with their jobs.  In the real world, adjustments to a person’s testing schedule are made often enough, and usually at a subsequent court appearance after the arraignment.

Usually, while being arraigned, most people just kind of stand there, wanting nothing more in the world than to get out of the courtroom as soon as possible.  Only after the actual proceeding do they try and decipher what happened.  There are millions of different possible ways the order to test can be made in court, but let’s look at 2 rather common hypothetical situations, the first involving a person charged with a regular OWI and who’s BAC score was a .14, and the next where a person is charged with OWI with a BAC of .17 or greater (High BAC).

Bear in mind that while my examples are somewhat non-specific by design, every Judge is different.  Sometimes, 2 Judges in the same building can be as unlike each other as night and day, so the scenarios in this article are, generally speaking, generic outlines of how things work.  This is particularly true in the hypotheticals below.  Remember from part 1 that J/M means Judge or Magistrate, and that JD stands for our imaginary defendant, Jane Doe.

In the case of a regular OWI, a Judge or Magistrate will probably proceed like this –

J/M:  Miss Doe, part of your bond is that you do not consume any alcohol or use any drugs without a valid prescription.  Do you understand?

J/M I’m also going to also order testing to make sure you follow my order to not drink.  I’m going to require that you test once per week for alcohol, and once a month for drugs.  You’ll get information about how to do this at the clerk’s counter.  If you miss a test, it will be viewed as a positive test.  It is your obligation to make it to the testing facility and provide a valid breath or urine sample.  There is to be no consumption of alcohol or use of any drugs without a valid prescription, do you understand?

J/M:  If you are on any medications, take them with you to show the testing facility so that they know not to flag any positive results.

In the case of a person who had a really high BAC, was in an accident, is also charged with possession of drugs (including marijuana), or where the Judge or Magistrate has any other indication that he or she was really drunk or also under the influence of other substances, it is likely that he or she will be required to test more frequently.  Accordingly, the exchange may be something like this:

J/M:  Miss Doe, it is going to be a condition of your bond that you don’t drink any alcohol whatsoever, nor may you use any drugs for which you don’t have a valid prescription.  The allegations against you concern me, so I want you tested regularly and frequently.  I’m going to have you test 3 times per week for alcohol and 3 times a month for drugs.  I will count any missed or diluted tests as a positive, and I expect your full compliance if you want to stay out of jail.  Are we clear on this?

Some Judges allow for medical marijuana, and some, probably a slight majority, do not.  Whatever you think of that, it is what it is.  For those who have used marijuana within about 30 days of their first drug test, the court will monitor his or her “levels,” meaning that the THC levels will be expected to go down consistently.

Although there may be some more banter and exchange between the person being arraigned and the Judge or Magistrate, what we’ve outlined above pretty much covers it.  The biggest and most important takeaway from our discussion is that at an arraignment, you plead “not guilty.”  The next most important thing is to understand that from the court’s perspective, requiring a person to appear for arraignment is an opportunity to order him or her to not consume alcohol (or use drugs) and then remind the person that compliance will be monitored through testing.

Yet for all of this, many courts still allow an arraignment to be waived, at least in misdemeanor DUI cases (this cannot be done in a 3rd offense, felony case).  As with so many other things, every court is different.  Some courts will not allow a waiver of arraignment in High BAC cases, although most will still (for now, at least) allow it in regular 1st offense cases.  Pretty much no court will accept a written waiver of arraignment in 2nd offense DUI cases.

My staff often knows the particulars of this better than I do.  When a person comes in for his or her appointment and retains me, we’ll find out whether the arraignment can be waived before the client leaves, assuming he or she hasn’t been arraigned already.

If you are facing a DUI charge anywhere in Macomb, Oakland or Wayne County and are looking to hire a lawyer, do your homework.  Be a good and smart consumer.  Read my articles and read what other lawyers have written, as well.  Read between the lines.  When you’ve narrowed down the field of lawyers you’re considering, pick up the phone and call around.  All of my consultations are done over the phone, right when you call.  You can reach my office during normal business hours (8:30 a.m. until 5:00 p.m.), Monday through Friday, at 586-465-1980.  Call when you’re ready – we’re here to help.