As veteran Michigan DUI lawyers, my team and I have literally seen and heard it all. In the course of speaking to so many people facing DUI charges, we often have to explain why things that some of them think are important don’t really matter, at least as far as “helping” their cases goes. In this article, I want to examine 4 of the most common excuses or explanations that people offer in the mistaken hope that it can somehow “help” or otherwise get them out of their DUI charge, and make clear why they don’t matter. 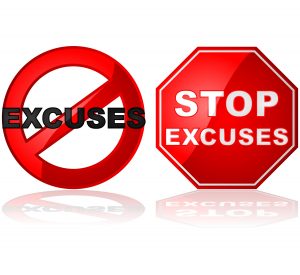 In truth, people come up with all manner of things to try and “excuse” what led up to a DUI arrest, but the few we’ll review here tend to sound like they might carry some weight, and that’s why they’re mentioned so often. It is, of course, basic human nature to do this, and just about everyone charged with a DUI will do it to some extent. Accordingly, it becomes part and parcel of the lawyer’s job to address these misconceptions and help the client understand how things really work, and what actually matters in terms of the evidence in any given DUI case.

This may be disappointing, but as I often point out, a person will be far better served by a lawyer who tells him or her what they need to hear, rather than just what they want to hear, and that really is the point of this installment. TV and movies often portray some testy Judge banging a gavel and dismissing a criminal case, and that can create the mistaken impression that things actually work like that.

It might surprise the reader to learn that in over 30 years of practicing law, and having handled tens of thousands of cases in court, I have NEVER seen a Judge pound a gavel, nor, for that matter, have I ever heard a Judge say anything like “Order in the court!”

In the real world, no Judge is going to dismiss a Michigan OWI (Operating While Intoxicated) case, or exclude evidence that would otherwise be part of it, unless a sharp lawyer handles the matter in such a way as to leave him or her with no other choice. In that regard, the kinds of legal issues that can be used to beat a DUI charge are very different from what a non-lawyer may think matters.

Accordingly, let’s start at the beginning, with a very common concern expressed after a DUI arrest:

1. “The police didn’t have any reason to pull me over.”

A person will often say this when admitting that he or she may have swerved, while also then trying to explain that it happened for some reason like his or her cell phone fell off the passenger seat, and they bent down to retrieve it, thereby momentarily causing the vehicle to cross into another lane.

There is no legal requirement for the police to first consider, and then dismiss, every possible legitimate reason why a person could have swerved before pulling him or her over. A vehicle is supposed to operate in its lane, and if the police see it swerving beyond those boundaries, or over the center line, then they have sufficient reason to stop it and investigate.

Contrary to what most people think, the legal standard for a traffic stop in Michigan is not “probable cause,” either, but rather the lower threshold of “reasonable suspicion.” This can get technical, but what’s important for our discussion is that if the police do see a vehicle swerve, violate a traffic law, or otherwise being driven erratically, then they can initiate a traffic stop.

What tends to matter most in terms of any potential legal challenge to the evidence is that the vehicle did, in fact, do what the police claimed it did. In other words, if someone is pulled over for swerving, a review of the police car dash-cam video had damn well better show that.

If not, then that presents a good basis to challenge the stop.

This is actually a decent explanation for why a person’s BAC result was higher than expected, particularly after only a few drinks.

However, it does absolutely NOTHING toward helping a DUI case. In Michigan, a person is guilty of Operating While Intoxicated (technically OWI, although everyone just says “DUI”) if he or she is either impaired by the consumption of alcohol, or if his or her blood alcohol level (BAC) is .08 or above.

It doesn’t matter if someone has been fasting for days and just has 2 drinks; if he or she is driving, and as long as his or her BAC is above .08, then that violates the law.

Likewise, it couldn’t matter less if a person chewed up and ate a king-sized foam mattress and then downed 20 drinks – if he or she is found to be driving with a BAC is below .08 AND he or she is not otherwise visibly impaired by the consumption of alcohol, there is nothing illegal about that.

I’m hoping the reader understands my use of hyperbole above, but the point remains that no matter what a person has or has not eaten, the legal issue in a DUI is whether or not his or her blood alcohol level was above .08, or, if it measured lower, that he or she was or was not otherwise visibly impaired as a result of his or her consumption of alcohol.

Ask any police officer or DUI lawyer this question: When someone is asked during a traffic stop how much he or she had to drink, what is the most common answer?

The overwhelming response will be “2.”

Without fail, people tell the police that they had 2 beers, 2 drinks, or 2 glasses of wine or 2 whatever.

The next most common answer is “a couple.”

In practice, though, people honestly do tend to seriously underestimate the amount they drink. That, of course, begs the question, why would anyone be keeping track in the first place?

Breath and blood tests measure a person’s bodily alcohol content. Those results are presumed reliable unless a person can make a legal showing that, in his or her case, they’re NOT.

Imagine someone charged with OWI after having provided a breath or blood sample that produced a BAC result of .11, which, in the scheme of real-world DUI cases, is relatively low.

What kind of legal defense is it for him or her to merely protest by saying something like “There is no way that test is right because I only had like 3 beers over about 4 hours!”

Do you think the Judge is going to say, “Well, okay then; case dismissed!”?

What is the person going to present, by way of concrete evidence, to show that the actual chemical test was wrong? Is he or she going to say something like, “Ask my friend who was with me the whole night. He’ll vouch that I only had 3 beers…”

The only way an “I didn’t drink that much” defense can succeed is if the person facing the DUI can prove that the chemical test (meaning the breath or blood test) was administered wrong, and/or that the the result it produced is unreliable for some objective reason, and doing that requires expert testimony and supportive facts.

This is about the worst excuse a person can offer. For as unhelpful as #’s 1, 2, and 3 are as any kind of defense to a DUI case, #4 is worse, because in addition to being completely unhelpful, to the extent it may be true that a person didn’t feel that drunk, it is taken to mean that he or she has developed a tolerance to alcohol.

To be clear, alcohol impairs a person’s judgment, and one of the first things that gets compromised is a person’s ability to self-analyze his or her own level of intoxication. Most DUI drivers do, albeit mistakenly, think they’re “okay” to drive, even though they’re not.

However intoxicated or not a person felt at the time he or she got behind the wheel, though, is really water under the bridge.

Of course, after the fact, admitting that one’s judgment was impaired, and that, in retrospect, a person realizes he or she should not have been driving is a good thing, and it shows a healthy acceptance of personal responsibility

By contrast, however, it’s NOT good when someone thereafter tells a Judge that, despite having a BAC that was well over the legal limit, he or she still thinks of him or herself as not having been that bad.

Moreover, either way, unless a person can actually prove that the breath or blood test result was wrong, then such statements only serve to reinforce the idea that he or she really was intoxicated.

Accordingly, arguments like “I didn’t think I was that bad” are going to help anything.

There are, of course, more excuses and explanations people try to use in the mistaken belief that it might help them when facing a Michigan DUI charge, but the 4 listed above are by far most common, and the simple point of this piece is that they don’t matter, and they don’t work.

The bottom line to a DUI case is that you hire a lawyer to make sure you avoid as many of the potential negative consequence and legal penalties as possible, but that won’t happen by offering up any of the things we’ve discussed above.

In the DUI universe, facts matter.

In the real world, the evidence in a DUI case must be carefully examined in order to challenge and exclude anything that can be kept out of court. This is done by putting in the work to develop an intelligent defense strategy.

As Michigan DUI lawyers, my team and I believe that starts by being honest and telling our clients what they need to hear rather than merely telling them what they want to hear.

For everything else that can be said about drunk driving charges, the simple fact is that success in a DUI case is best measured by what does NOT happen to you.

For our firm, that means our job is to make sure we produce the very best and most lenient outcome possible, but that won’t happen screwing around with excuses and explanations that are of no value in accomplishing that.

If you’re facing a DUI charge, be a smart consumer and read around. See how lawyers explain DUI cases, the DUI process, and their various approaches to handling these matters. When you’ve done enough of that, start checking around. You can learn a lot by actually talking with a live person

If your case is here, in the Greater-Detroit area (meaning in any court located in Wayne, Oakland, Macomb, Lapeer, Livingston, St. Clair or Washtenaw County), give us a ring, as well. All of our consultations are free, confidential, and done over the phone, right when you call.