In our roles as Michigan DUI lawyers, we have seen just about every reason a person has been pulled over by or otherwise encountered the police prior to a drunk driving arrest. It shouldn’t be much of a surprise to learn that cell-phone call-ins and tips have grown to play a significant role in DUI enforcement. Sometimes, people don’t know how the police came upon them, only for us to discover, after we obtain the police report and any relevant video, that another driver provided a cell-phone “tip” about someone (them) driving erratically, and possibly being drunk. 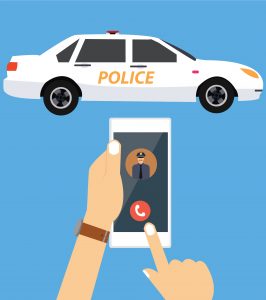 To call the law completely “settled” regarding cell-phone tips may be a bit of an overstatement, but as it stands now, there is little doubt that the police can pull someone over based upon such information if it is otherwise sufficiently reliable. This piece won’t examine the subtle nuances of the law, as any discussion of the technical legalities goes well beyond its scope. It is a critical for a DUI lawyer to carefully examine all the evidence, and to make sure that, when a client gets pulled over, whether because the police observed something or as the result of a cell-phone tip, there was a sufficient legal basis and that analysis must always be done in each and every case.

Above and beyond the legal implications of a DUI arrest following a cell-phone tip, there is also a practical consideration, at least from a societal (and, of course, the court’s) perspective, because it can be fairly said that anyone drunk enough to catch the attention of other drivers and motivate them to call the police was probably pretty drunk. Even if it turns out that a person wasn’t drunk, but was all over the road because he or she was distracted by texting, then it’s not a bad thing for him or her to get pulled over for being a dangerous driver. In the context of a DUI case, though, the idea that someone was obviously unable to drive in a normal manner is a complicating factor.

The first order of business for us, once we’ve been hired for a DUI case, is to obtain the evidence. Of course, this includes the police report, police car dash-cam and any body-cam video, but it can (and, in many cases, absolutely must) include a recording of the 911 call of any cell phone tip, as well. This is important to ensure that the tip, and the stop that followed from it, meet the required legal standards.

It’s a given that the best possible outcome in a DUI case is to get the whole thing dismissed. However, it’s important to keep in mind that a DUI case will NOT dismiss itself. A lawyer has to dig into the evidence and, when something is found, then prepare to fight. As a general rule, the biggest flaws with the evidence tend to be found in the areas of the traffic stop and the chemical (breath and/or blood) tests.

Here, we could get lost in technicalities, but the more important point that I’m driving at is that of all the places to find something that can get an Operating While Intoxicated (OWI, the actual term for what everyone just calls “DUI”) charge knocked out of court, the traffic stop is one of the best, and there is a lot more room for error when the police follow up on a cell-phone tip than when they drive behind somebody who is swerving and weaving, and it’s all caught on dash-cam.

While that all sounds good, though, the simple truth is that the overwhelming majority of drunk driving cases do not get dismissed or thrown out of court. Unfortunately, there is this idea, reinforced by too many legal websites, that the way to “beat” one’s case is for a lawyer to use some mysterious legal “maneuver” to keep the evidence out of court.

Evidence is excluded from court because it was obtained illegally, or because something wasn’t done right and a Judge decides that it’s not reliable. A person can hire a dozen of the best lawyers in the country to fight the case, but unless there is a problem with the evidence, or the prosecutor can’t otherwise prove that the person wasn’t driving while over the limit, then there isn’t going to be any kind of dismissal.

In other words, it’s not like some sharp lawyer can “fight” otherwise legal and solid evidence and get it thrown out of court, no matter how much they make it sound like that in their marketing message.

That’s not opinion, either. One thing that is conspicuously missing from any of those “we fight everything” type websites are facts, and the King of all Facts is the Annual Drunk Driving Audit conducted by the Michigan State Police (MSP).

Under state law, every arrest for an alcohol-related traffic offense must be tracked from arrest through final disposition. There is no way for a case to be kept “off the record,” so these figures include EVERY arrest for a DUI that occurs each year in Michigan, and everything that happens thereafter. The audit follows each case, and includes arrests that don’t result in charges, as well as the disposition (outcome) of every case that does result in a charge.

To be clear, when I say the “overwhelming majority” of DUI cases, as the actual numbers make clear (and they are pretty well consistent from year to year), overall, less than 2% of all people arrested for and charged with an OWI offense in Michigan have their case thrown out of court.

To put this another way, once someone is charged with a DUI offense, there is a better than 98% chance that it’s NOT going to get tossed out, or that they’re going to manage to “beat it” somehow.

That’s not because almost every lawyer sucks, except the few who proclaim themselves to be so great, or who incessantly wrong on and on about “fighting.” Instead, less than 2% of all DUI arrests get thrown out because there is no adequate legal basis to make that happen. If a person consumed enough alcohol to be over the limit, and then gets caught driving, the only way out of the charge is for the police to have really screwed something up.

Now, to be sure, that does happen, and plenty enough evidence winds up being excluded. My team and I challenge evidence and win those battles as much as anyone else. However, we don’t squander the client’s money (and, just as important, the Judge’s patience) fighting every last thing just for the sake of fighting, and running up the bill. Instead, we will do absolutely everything that can and should be done under the circumstances to produce the best results possible.

Always remember – Success in a DUI case is best measured by what does NOT happen to you.

What’s important is that deciding what to fight and when to fight is a decision that’s best made after all of the evidence has been obtained and evaluated. As noted above, 2 of the biggest areas where cases can get botched has to do with the traffic stop and the chemical (breath and/or blood) testing.

That, of course, includes traffic stops that follow from a cell-phone tips. Anyone whose arrest came about in that way should have the security of knowing his or her lawyer is going over the evidence with a fine-tooth comb.

Although it’s not particularly exciting, or otherwise any kind of grand revelation, that is the big takeaway for anyone arrested for a DUI after a cell-phone tip.

In general, cell-phone tips are “legal,” and yes, the police can “do that.”

That said, the traffic stop is one of the most fruitful areas for challenging DUI evidence, and a cell phone tip must have sufficient indicia of reliability. No matter what, the police must always at least have “reasonable suspicion” for stopping a vehicle, so the chances of finding something worth challenging following a cell-phone tip is an order of magnitude higher than if someone rear-ends a parked police car.

If you are facing a DUI charge, be a wise consumer and read around. Pay attention to how different lawyers explain the DUI law and the DUI process, and how they explain their various approaches to those things.

When you’ve done enough of that, start checking around. You can learn a lot by actually talking to a live person. If your case is anywhere in the Greater-Detroit area (meaning anywhere in Wayne, Oakland, Macomb, Lapeer, Livingston, St. Clair or Washtenaw County), give us a ring, as well.