This is part 2 of an article examining why asking “how much do you charge?” is the dead-wrong way to go about looking for a lawyer for a criminal, driver’s license restoration or DUI case. In part 1 of this piece, I pointed out that you won’t find the right lawyer by asking the wrong questions, nor will you ever get a high standard of legal services at cut-rate prices. I did caution, however, that plenty of lawyers charge fees way in excess of the level of services they provide, meaning, that it’s also easy to get “taken” by paying premium fees for mediocre skills. 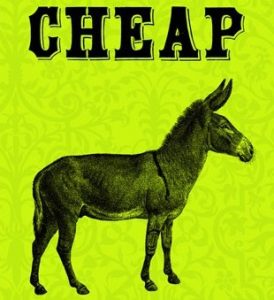 I also noted that attention to small details is one of the key things that differentiate better lawyers from the rest of the pack, especially those market themselves based on low cost. These little issues are usually not front and center or glaringly obvious in an active case, but are the kinds of things that show up down the road, sometimes years later, and make a person wish he or she would have known or thought about them at the time. The example I used in to make my point in part 1 was having to report a DUI to a current or prospective employer, or to a licensing agency.

Assume that when the hypothetical case was pending, the person may have thought things were great simply because he or she didn’t get any jail (and I made clear that jail is almost never on the menu in a 1st offense DUI case, anyway), and only served a year on probation while having to complete an alcohol counseling program.

At the time, that sounded like a pretty good result…

Later, when the person has to inform his or her current or prospective employer, or a licensing agency, about the DUI, concerns are raised about that alcohol “counseling” program. The person learns it would have looked a lot better if, instead of having to go through counseling, he or she had completed a kind of alcohol “education” program.

Now, the licensing agency is looking to have the person undergo a new substance use evaluation.

In the case or a prospective employer, it’s even worse, because the person doing the hiring may just figure that since there are plenty of other qualified candidates without a conviction for OWI on their record, it makes more sense to pass over this person and move on to one of them, instead of getting involved with someone who may have an alcohol problem and had to go through counseling to deal with it.  Why take the risk?

These are the kinds the small details that, while easy to overlook in the short run, can have big implications later, and are precisely the kinds of things a bargain lawyer will never address.

Consider this hypothetical scenario: if you’re rushed to the hospital, bleeding profusely from a huge laceration to your leg, your first concern is getting it “fixed.”

Imagine, though, if you were given a choice: you can have Dr. Five Thumbs Fred, who will  stop the bleeding and save your leg, but whose suture work will leave a scar that looks like a cross between an earthworm and a zipper, or you can have Dr. Detail, who will not only “fix” your gushing cut, but whose stitch-job will heal up almost invisibly over time.

Who would you pick?

It’s kind of like that for lawyers, except that those who are mindful of the details won’t be found among the cut-rate operators (remember, though, that there are plenty out there who charge top-rate fees for run-of-the-mill services).

This means you have some work to do as you look for representation.  As you do that, never overlook the value of experience.

In my office, we handle DUI cases, driver’s license restoration appeals, and certain criminal matters (mostly things that happen in, during, or because of the operation of a vehicle), like suspended license, and drug possession charges.

We also handle a lot of embezzlement and indecent exposure cases as sub-specialties.

We know the ins and outs of these cases from every angle because we handle them on a daily basis.

My team and I don’t do murder or rape cases, or handle any “capital” (meaning a charge punishable by life in prison) offenses.  We stick to the kinds of cases listed above, and do them over and over and over, in the same courts, in front of the same Judges, day-in and day-out.

When my team and I brainstorm about one of our cases, we try and figure out the best way to “fix” the situation, and how to get the best outcome possible now, and for the client’s future.

Because we’ve charged enough to begin with, we don’t have to worry about wrapping a case up as quickly as possible, and can, instead, focus on results. That’s what you should be paying for. It’s no “deal” to hire some cut-rate a lawyer who just moves you through the system as quickly as possible.

For example, in exchange for the fees I charge in a driver’s license restoration or clearance case, I guarantee to win. In these cases, my client will only pay me once to get back on the road. This means that I’m not only as “invested” in winning the first time around as my client, I also put my money where my mouth is.

You don’t get that from bargain-basement lawyers.

It’s important to understand that, for a lawyer, limiting his or her practice areas also limits the size of his or her potential client base, but also provides way more experience in those selected areas.

As “DUI lawyers,” my team and I handle anywhere from 4 to 8 drunk driving cases each week, whereas a lawyer who simply “does” DUI cases, along with everything other kind of case he or she can take, may only handle 1 or 2 each month.

That’s means a DUI lawyer like me will gain as much experience in a year as it will take another lawyer more than 10 years to accumulate. When you consider that I have nearly 3 decades of experience, the disparity becomes obvious.

The fact is, lawyers who have concentrated in a certain field will routinely deal with and learn how to fix issues that the “how much do you charge?” kind of lawyer doesn’t even know exists and/or may never encounter.

This is important, because as a consumer of legal services, you’re either buying a lawyer’s experience, or paying his or her tuition to get it in a situation he or she hasn’t dealt with before and that directly affects your future.

It would be foolish to pretend there isn’t an economic reality to the practice of any profession like law, medicine, or dentistry.  Either you charge enough to do the best job possible, or you lowball it and try and make your money doing as little as possible on the highest number of cases.

That’s not good, either.

Whatever else, the best practitioners in any field are NEVER among the cheapest.  Cheap is cheap, and if you go for low cost, you will always get what you pay for.

Do you really think the doctors in the medical marijuana clinic who will sign off on a card for $75 are providing a high level of diagnostic and medical care?

I’m trying to be polite here, but the bottom line is that, in any profession, the best will never squander their workdays trying to compete with low-ballers.

The grand lesson here is that if you approach something like a DUI, or getting your driver’s license back, with a mindset that asks, “how much do you charge,” you’re going about it all wrong.

When results matter, find a way to get the money, and then screen potential lawyers carefully. For every cut-rate lawyer who will try and out-price the competition, you’ll find another who sets his or her fees well above the value of the services they can provide. You have to sift through all this for you own good.

It makes sense, when you think about it, that you should never pay too little, nor should you pay too much, for a lawyer. That’s how you should be thinking…

If you need to restore your Michigan driver’s license, or need the clearance of a Michigan hold from your driving record, we can get you back on the road, no matter where you live.  If you’re facing a DUI or criminal charge anywhere in Oakland, Macomb or Wayne County, do your homework.  Read around, then check around.  All of my consultations are done right over the phone, when you call in.  We are really friendly people who will be glad to answer your questions and explain things.  You can reach my office Monday through Friday, from 8:30 a.m. until 5:00 p.m. (EST), at 586-465-1980.  We’re here to help.