As Michigan DUI lawyers, we answer a lot of questions about what a person can expect as he or she goes through the court process following a drunk driving arrest. There are various things that can be avoided completely, some that fall into the “maybe” category, and others that are all but certain. In this article, I want to talk about the certain requirement that anyone on bond, awaiting the resolution of his or her DUI case, or on probation, after it has been wrapped up, will be absolutely prohibited from consuming alcohol by the court. 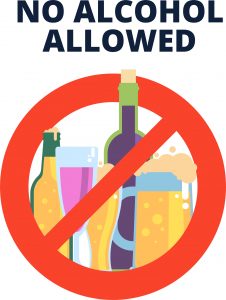 It might help to begin our discussion with the humbling and universally applicable reminder that, “Yes, you are special and unique – just like everyone else.” This really has particular application in the DUI world, because an important part of the role my team and I have to fulfill is very much like being a diplomat, shuttling between our client, where we are mindful of his or her individual circumstances, and the court system, which winds up, at least to some extent, treating everyone the same. Our job is to make sure the court doesn’t lose sight of our client’s individuality, and to make sure the client understands that, at certain points, you’re going to be treated like everyone else, regardless of your particular situation.

Although most people understand and accept the “no drinking” order issued by every court – in every DUI case – even if just because they have to, there are some who have a very hard time with it. Over the course of 30-plus years, I’ve heard every explanation imaginable for why such a restriction should NOT be placed upon a person, either as a condition of bond, or a term of probation. These have ranged from the “need” to share a few cocktails at business dinners and meetings to arguments like, “They’re treating me like I’m an alcoholic,” “Drinking is legal,” “What about my rights?”, and “This isn’t fair!”

The simple fact is, that’s just the way it is – at least nowadays. As a veteran lawyer, I remember handling DUI cases before “no drinking” orders ever existed, and were ever thought of, much less imposed as a condition of bond. In fact, I remember Judges sentencing people in DUI cases and sternly warning them that, while they were allowed to drink at home, their order of probation specifically prohibited them from operating a motor vehicle after drinking, and making clear that if they ever got caught behind the wheel after consuming any amount of alcohol whatsoever, no matter how little, they’d be in violation of that probation.

Considered by the standards of today, that was crazy.

I also, however, remember when the first local court began imposing a “no drinking” order as a condition of a person’s bond, after arraignment on Operating While Intoxicated (OWI) charges.

Back then, testing was more complicated, and required a person to be assigned a “color,” and be required to call a designated phone number at a local testing facility every day to see if his or her color was picked, and, if so, to show up and provide a breath and/or urine sample.

When the first local court started doing this, I couldn’t help but think, “what a pain in the a$$.”

Nevertheless, I also knew, right then and there, that this was going to be the way of the future, and I was right about that.

Fast forward a few years, and a “no drinking” bond condition with mandatory testing to ensure compliance became the norm in every local court.

Fast forward up to today, and the method of testing has largely shifted from being assigned a color and having to call in and then show up at some place to either “blow” or “drop” (i.e, provide a breath or urine test), to now having to use a portable, cellular breath testing unit that obviates the need to go anywhere to test.

What that means for anyone facing a DUI is that you can count on being ordered by the court to NOT consume any alcohol while your case is pending, and that it is extremely likely that you will be required to test, to some extent or other, to ensure that you don’t.

You can also expect the same thing when you’re put on probation following a DUI conviction.

In practice, some courts hammer people with a breath test machine and make them blow into it 3 times a day.

There are other courts that, instead of using this newer technology, will instead order (at least in some cases) that a person still call in with a “color” to test randomly. The “call and color” method is mostly reserved for cases where the testing is far less frequent.

No matter how much a person may not like this, most are smart enough to not make any kind of “What about my constitutional rights?” or “This isn’t fair!” arguments directly to the Judge.

Instead, they’ll keep a straight face and say “yes, your honor” when asked if they understand.

It’s only once they’re out of the courtroom, or off-camera, that they’ll start complaining, leaving it it to the lawyer to explain the whole “no drinking” condition, and to make clear that it’s imposed on everyone facing or who has been put on probation for a Michigan DUI charge.

There are numerous realities about alcohol and DUI drivers that are rather complex, and go well beyond the scope of this article, but I’ll try and simplify 3 of the more important of them here because they are relevant to why the “no drinking” condition of bond and probation is universal:

1. As a group, people arrested for a DUI have a statistically higher rate of drinking problems than society at large. In other words, if you chose 1000 people in the U.S at random and screened them to see if they had any kind of alcohol problem, and then, after that, chose another 1000 people who were either currently facing or previously had a DUI conviction, and put them through the same screening, you’d always find a higher rater of drinking problems among the DUI group.

2. It has been clinically shown that an effective tool to disrupt or head off a drinking problem, or a potential drinking problem, is to separate a person from alcohol. The courts know this, so think about it from the their perspective for a moment; there is an upside – and absolutely no downside – to prohibiting anyone who is facing a DUI or who is on probation for one from consuming alcohol.

3. Simply because the court can issue a no drinking order, that’s what they will do. This sounds simplistic, but as a very nice local Judge sometimes put it when he imposes a no-drinking bond or probation condition, “You’re going to take a break from drinking while this case is going on. If you have a problem with that, then you may have a problem with alcohol. If you don’t have a drinking problem, then this should be easy enough.”

Sure, it might suck for some people to have to pass on having a glass of wine with a holiday or birthday dinner, but to the extent that anyone is more than a little disappointed by this, then maybe he or she needs to reflect a bit on his or her relationship to alcohol.

Whatever else, nobody gets unhealthy or suffers any problems from NOT drinking.

To put it bluntly, if not being able to consume alcohol for a while is that big deal to a person, it may very well indicate that drinking is too high up on his or her list of priorities.

However much that may or may not apply to any particular person, the regular experience of Judges can be enlightening, because, in the real world, a lot of people don’t comply with the “no drinking” condition of bond or term of probation.

Back when court was being held in-person, it was difficult to sit through any morning or afternoon criminal call and not see any number of bond or probation violation cases called. The most common underlying reason for such violations, by far, was that a person had tested positive for alcohol.

In the course of a week, the average Judge hears countless excuses why someone to whom it was made crystal clear that a condition of staying out of jail was to NOT drink went ahead and did so, anyway.

The bottom line is that there is a consistent (and not insignificant) percentage of people are going to complicate their cases and drink alcohol, even though they’ve been told that doing so can get them thrown in jail, and even though they know that they’re going to be called on to provide a test sample of some sort or other to confirm their abstinence.

What’s to be said about these people?

• That they’re defiant, and don’t respect the Judge’s authority?

• Or, is it that they really can’t take a break from drinking?

• Could it be a little of both, or maybe something else?

Whatever the reason a person on bond or probation drinks in violation of an order to not do so, it’s never good.

Everyone who gets caught drinking in violation of condition of bond or probation will try and explain to the Judge that it was some kind of “one-off,” and promise that it won’t happen again, but those excuses really serve to reinforce a Judge’s concern about people drinking even though they have been specifically ordered to NOT do so.

For all the excuses and explanations, the bottom line is that just about every single person on bond for a pending DUI charge or on probation for one will be ordered to NOT consume alcohol.

The reasons for this, and any arguments about why it shouldn’t apply to someone, or why he or she “needed” to drink on some occasion or other don’t matter.

It’s the same thing with boarding an airplane; a person can’t have any kind of knife on his or her person, even if it’s a really small, keychain sized Swiss Army Knife.

Because, whatever else – that’s just the way it is.

If you’re facing a DUI charge and looking to hire an attorney, do your homework, be a wise consumer and read around. Read how lawyers explain the DUI process and what’s involved in it, and how they explain their various approaches to it.

If your case is pending in any court in the Greater-Detroit area (meaning anywhere in Wayne, Oakland, Macomb, Lapeer, Livingston, St. Clair or Washtenaw Counties), give us a ring, as well.