In the course of every DUI case that goes through the court system, and before ever being sentenced by the Judge, a person must, by law, complete a mandatory written alcohol screening test and meet with a probation officer for an information-gathering interview.  The results of that screening test (it is calculated using a numerical scoring system) and probation interview are used to prepare a sentencing recommendation (this too, is required by law) that is sent to the Judge to be used in deciding exactly what sentence to hand out.  In the real world, this step is THE most important part of a drunk driving case because it directly impacts what will happen to you more than anything else.  Accordingly, being prepared for both the written screening and the probation interview is critical to producing the best outcome possible.  In my DUI practice we’ll spend several hours (at least) in preparation for this, including having a separate appointment and prep session a few days before you go for your interview with the probation officer.  Among the herd of DUI lawyers, I am uniquely qualified to help with this, having studied and worked with alcohol and drug issues for over 2 decades as well as having completed a formal University post-graduate program of addiction studies.  The development, diagnosis, treatment of and recovery from addiction disorders is at the core of everything I do, every single day. 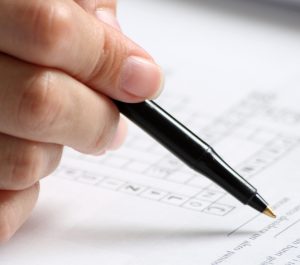 Preparation for the alcohol screening test begins at our very first meeting.  I typically use about an hour at that first appointment to going over (or, as I say, introducing) the questions you’ll be answering because I believe this information is best absorbed by being presented twice; initially at that first meeting, and then again, typically at our second office appointment right before you go in for the meeting with probation.  This whole process of alcohol screening and meeting with probation is variously referred to an assessment, a PSI (for pre-sentence investigation), and/or a screening.  Whatever it’s called, it refers to the procedure and process wherein a person completes the written alcohol screening test (to confuse matters more, the testing instrument itself is sometimes called a “substance abuse assessment”), meets with, provides information to, and is also interviewed by the probation officer.  All of this is used to formulate that written sentencing recommendation given to the Judge.  It is a critical mistake to allow the client to take the screening test and/or walk into that probation meeting without having gone over everything in order to make sure he or she is thoroughly prepared.

Perhaps the biggest and most common miscalculation I see lawyers make is assuming that, when they speak at the sentencing, they can somehow convince the Judge NOT to follow the probation department’s recommendation in some significant way.  It doesn’t work like that; it never has, and it never will.  When you walk into court on the day of sentencing, your lawyer is required to get a copy of the sentencing recommendation from the court clerk and review it with you.  In fact, the Judge will specifically ask if you’ve seen the recommendation, and if there are any errors within it that need to be corrected.  Later, you and your lawyer will be asked for any comments about the recommendation itself.  This is more a formality rather than anything else, because in the real world, pretty much every Judge, in every court, follows the recommendation, if not to the very letter, then damn close to it.  To put it another way, the sentencing recommendation is really the blueprint for what’s going to happen to you, and there is simply no Judge who is going to disregard any substantial part of it.  This means, then, that the best and only real chance you have to influence what’s recommended, and, in turn, to affect what ultimately happens to you, is to be prepped and ready for the screening and the probation interview.  It is a fool’s errand, really, to just show up in court and start arguing against the recommendation as it sits in the Judge’s hands.  That’s no better than pissing in the wind.  Indeed, if you are not carefully readied for the whole PSI process, then you are stumbling blindly through your DUI case without any kind of plan.

All of the questions on the alcohol screening test can rather neatly be placed into 1 of 5 categories.  This really applies to any kind of alcohol or drug screening test, but there are differences amongst the various instruments, including those used in the court system.  You need to learn these 5 categories and what they mean in order to understand how your answers will be “scored.”  Every answer has what amounts to a numerical value, and your points added up and your total compared to a scoring key.  This aspect of the larger PSI process is really the most important, because no matter what else you say and no matter what else did or didn’t happen, if your score is within the range of a drinking problem, you’re going to get ordered into counseling or treatment, no matter what.  The opposite, however, is NOT true.  A person can “test out” as not having a drinking problem, but still be perceived as either having or otherwise being at risk to develop one for a multitude of other reasons.  This happens often, for example, when a person’s BAC result is high, even though a single documented instance of an elevated BAC is generally of no real clinical significance.  This is where I have to use my clinical training to counter any premature conclusions reached by probation, or even the Judge, that otherwise lack empirical support.  And in the real world (one of my favorite phrases, can’t you tell?) this happens because  the court system has an inherent “alcohol bias.”  It is well recognized that the court system is as likely to “over-diagnose” a person as any other entity.  We need to avoid this.  No one wants to pay for and get stuck having to go to unnecessary classes, counseling or AA meetings. Yet for all of that, thorough preparation includes a lot more than just being able to do well on the alcohol screening test.

Part of what we’ll do in the second meeting is look at the underlying psychology of probation officers and the whole probation process.  Do you really think that cops are cop-like, lawyers lawyer-like, doctors doctor-like, salespeople “pushy,” but probation officers are somehow different, and have no defining characteristics?  There’s a whole background story to how and why most of them fall into this occupation, and on top of that, there is a whole world of experiences unique to their profession.  As much as an artist may see the world one way, and it’s probably a lot different than the way a cab driver sees it, probation officers have certain and regular experiences that shape how they see the world, as well.  You are at a distinct disadvantage if you don’t know what this is.  By knowing where the probation officer is “coming from,” you can get a real leg up at the interview.  Would anyone walk into a job interview and know nothing about the company or position?  So why would anyone go to an interview as important as this knowing nothing more than the time to show up? I have written a lot about how location affects a DUI case.  Make no mistake, each probation office is part and parcel of that whole location thing.  The probation department in Rochester Hills is very different from the probation department in New Baltimore.

There is so much to this that I can’t even really scratch the surface in this article, but to get an ideal of how deep this goes, consider these things:  If your BAC was anywhere near double the legal limit of .08, are you planning on saying you’re not a big drinker?  And how do you expect that to be perceived?  Here’s a hint: it won’t go over very well.  When asked why you decided to drive, were you going to say you didn’t think you were that bad?  That response makes you sound like you’ve developed a real tolerance to alcohol.  So do you admit to deciding to break the law and drive drunk, anyway?  When you’re asked what your plans are for drinking again, will you say that you’re taking a break?  That sounds like you think your relationship to alcohol has become problematic.  On the other hand, if you answer that you will drink again at some point, it makes it seem like drinking holds a high priority in your life and thoughts, especially when you’re in the thick of a drunk driving case.  In addition to there just being a lot to this, there is no small amount of subtlety, as well.  You’re going to need to prepare for the nuances of things just as much as you’re going to need to be ready for the big stuff.

I always tell anyone looking to hire a DUI lawyer to check around.  Read articles, and then make calls, because you should.  There is no reason, ever, to be anything less than a good consumer.  For my part, I know that absolutely no one can prepare you for the PSI better than me, but I don’t want you to take my work for it.  Do your homework.  If you’re facing a DUI anywhere in Metro-Detroit (Wayne, Oakland and Macomb Counties, as well as the surrounding areas), you can reach my office Monday through Friday, from 8:30 a.m. until 5:00 p.m., at 586-465-1980.  We’re here to help.  All consultations are done over the phone, right when you call, so there’s no need to make any kind of appointment to at least get my take on your situation.