In part 1 of this article, we began an overview of breath test refusals in DUI cases, and the larger subject of chemical tests as well as Michigan’s Implied Consent law. We saw how there are really 2 kinds of tests: a preliminary breath test (PBT) which is administered at the side of the road before an OWI arrest, and then a formal chemical test that comes after arrest. Although a “chemical test” can include either blood, breath or urine, in DUI cases, it’s limited to breath and blood, as urinalysis cannot be used to calculate person’s bodily alcohol content (BAC). 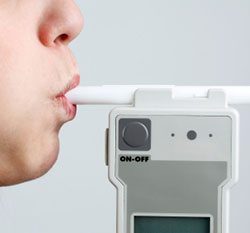 I explained that the refusal to submit to a PBT is only a civil infraction, and is very different from the refusal to submit to a chemical test as contemplated by Michigan’s Implied Consent law. If a person refuses a PBT, he or she only faces a fine and a penalty of 6 points on his or her driving record. In the real world, my team and I almost always negotiate the dismissal of a PBT charge as part of the resolution of an OWI charge. Although a person is legally “obligated” to take a PBT test, the failure to do so does NOT carry any potential suspension of his or her driver’s license.

In contrast, we then saw that refusing a breath or blood (i.e., chemical) test after arrest will automatically result in a 1 year suspension of a person’s driver’s license, unless a he or she timely requests and wins a hearing to challenge the refusal for 1 of the 4 specified legal issues before a Michigan Secretary of State hearing officer. We then looked at the how those issues are defined in the law. In this second half, we’ll dig a bet deeper to see what those legal issues really mean and how a person can still get his or her license back even after an Implied Consent refusal.

Generally speaking, a person facing an Implied Consent refusal should ALWAYS request a hearing before the Michigan Secretary of State, because, above and beyond all the legal stuff involved, if the officer fails to show up within 20 minutes of the hearing time, the matter is dismissed and the license suspension is completely avoided.

Let me repeat that: no matter what else, and no matter what did or didn’t happen, if a person requests a hearing and the officer fails to show up (or, as things are proceeding now, during Covid-19, if the officer fails to appear for an online hearing), the entire Implied Consent refusal case is thrown out, and the person faces no penalties. Accordingly, his or her license will NOT be suspended

It’s not often that the officer will fail to show, but, in our experience, it does happen about 10% of the time, so it’s always worth a shot to request a hearing and at least hope for the best. Whatever else, this amounts to the proverbial “nothing ventured, nothing lost” situation.

By at least requesting a hearing, a person holds open a chance for the officer to miss the hearing, and therefore not lose his or her license.

That seems like a “no-brainer” if there ever was one.

Statistically speaking, the chance of winning an appeal because the officer does show is pretty low (about 1 out of 10).  This means, then, that unless there is some identifiable problem that is relevant to at least 1 of the 4 legal Implied Consent issues set out in part 1, it doesn’t make any sense to waste money on a lawyer to attend a hearing just to hope the officer doesn’t make it.

However, as I’ve been trying to make clear, even if a person totally refused the chemical test and has no real defense, but still requests a hearing and just goes alone, it’s basically a free chance to have the refusal case dismissed and NOT have one’s license suspended.

Remember, if the officer fails to appear, the entire matter MUST BE dismissed.

To be clear, I am not trying to suggest that every Implied Consent case is a pre-ordained loser. A DUI lawyer should always carefully review the evidence with the client, and any good DUI attorney will do just that.

However, unless doing so reveals a problem with the way the chemical test was requested, it’s almost always a complete waste to pay legal fees to challenge the refusal at the Secretary of State, given that the statistical chance of winning an appeal when the officer does show is overwhelmingly unfavorable.

This makes more sense when you consider what the 4 legal issues actually mean in real world terms:

1. The officer only has to show “reasonable grounds” to have suspected you of driving while intoxicated. This is separate from the issue of “reasonable suspicion” to have pulled you over in the first place. In other words, consideration of this issue starts at the point the police made contact with you, not before.

2. I’ve never met anyone charged with a chemical test refusal who hadn’t been arrested for a DUI. As long as you were arrested, this is a total non-issue.

3. Unless you were instructed to blow into a breathalyzer with vomit on it, or the officer asked you to get naked and do a handstand while providing a breath sample, this is also a non-issue

4. First off, most people don’t recall having been advised of their rights because they were drunk, and second, as long as the police say they did so, and unless a person can produce video or other solid evidence showing that he or she was NOT advised of them, this issue is a loser, as well.

Here’s the good news: whether a person holds and loses a Secretary of State hearing (and loses), or just skips a hearing altogether and let’s the suspension go into effect automatically, he or she can, nevertheless, appeal directly to the circuit court in the county in which they live to override the 1-year suspension and get a restricted license.

In other words, the chemical test refusal suspension can be overridden by a circuit court Judge.

My team and I do this all the time in our practice.

By law, a person can only get a hardship license after a chemical test refusal one time in his or her life. In Michigan, an implied consent suspension is the only DUI-related hardship appeal available in court, but simply because it’s there, it is an absolute lifesaver for many people.

It is important to understand, though, that the decision to approve a hardship appeal is solely within the Judge’s discretion, meaning he or she can say yes or no, as the mood strikes.

However, in over 30 years of practice, I have NEVER lost an Implied Consent appeal to circuit court. As of today, our practice has a 100% success rate in winning these cases.

Even so, it’s no small hassle to have to go through all this, and it’s not cheap, either. It is far better for a person to submit to a chemical (breath or blood test) when it’s offered.

Chances are, though, it’s probably too late for anyone reading this.

It is worth noting that most of what we’ve talked about so far really only applies to 1st offense DUI cases, and not 2nd or 3rd offense charges.

The bad news here is that anyone convicted of a 2nd or 3rd offense DUI is going to have his or her license revoked anyway, so a chemical test suspension on top of that doesn’t matter.

A revocation means taken away for good, and is far more serious than a suspension, which is, by definition, temporary. Consider this example:

Assume that Delinquent Danny gets suspended from school for 2 weeks on Tuesday, only to wind up being completely expelled from it on Thursday.

Once he’s expelled, the remaining 12 days of his suspension don’t matter anymore.

However – there is an exception to the whole issue of revocations for 2nd and 3rd offense cases IF the person charged is going to go through sobriety court.

Michigan law allows a sobriety court Judge to override the revocation of a person’s license for a repeat-offense (habitual alcohol offender) OWI revocation.

Thus, going to court to get a license after a refusal is not an option for any 2nd or 3rd offender, UNLESS he or she will be admitted into a sobriety court. In those cases, it is imperative to have the Implied Consent suspension set aside, so that the sobriety court Judge can then override the revocation that results from the conviction for a 2nd or 3rd offense DUI.

This can all be a bit confusing to anyone who doesn’t do it for a living, and a more detailed explanation goes beyond the “overview” scope of this article, but even more significant, perhaps, is that these issues rarely ever come up anyway, and the chance of anything like this being relevant to the reader is extremely remote.

For all of that, the simple fact is that the police are going to get a blood sample when someone refuses a breath test (and blood tests tend to come back with BAC results that are a bit higher than those obtained through breath testing). Accordingly, there is essentially zero benefit to refusing a chemical test in 1st offense cases, and very little potential benefit in 2nd and 3rd offense cases.

And that brings us full circle, at least in terms of our brief look at the more important points of Michigan’s Implied Consent law. If there’s a simple takeaway from all this, it’s that if you refuse to take the PBT at the side of the road before your arrest, it’s a civil infraction with no license consequences.

If you refuse the chemical test after your arrest for a DUI, your license will be suspended, although, at least in a 1st offense DUI case, you can usually get it back if your lawyer files a hardship appeal in the circuit court in the county where you live.

If you are are facing a DUI and looking to hire a lawyer, be a smart consumer, do your homework, and look around. Read how lawyers explain the DUI process, and how they explain their approach to it. When you’ve done enough of that, start checking around. You can learn a lot by actually talking to a real person.

If your case is pending anywhere in Metro-Detroit, meaning in any court within Wayne, Oakland, Macomb or the surrounding counties, feel free to give us a ring. All of our consultations are free, confidential, and done over the phone, right when you call. My team and I are very friendly people who will be glad to answer your questions, explain things, and even compare notes with anything some other lawyer has told you.