In the previous article about examining the evidence in a Michigan DUI case, I noted that just about everyone knows that the police report is important. I even pointed out that, once in a while, a proactive DUI client will show up for his or her appointment having already obtained that report (I also explained that doing so is not necessary because that’s one of the very first things we’ll get). In this article, I want to look at both the significance of the police report and also examine its main shortcoming. At best, a police report is the honest recollection of the officer who wrote it, but those recollections are, by definition, subjective, and can only be from the officer’s perspective. At worst, a police report can be a lot of exaggeration and BS. Often enough, the truth lies somewhere in the middle. 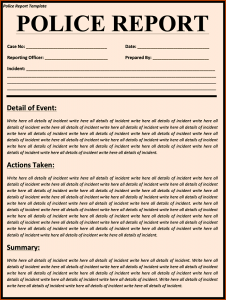 In the old days, the police report was the pretty much “it,” in terms of evidence leading up to a DUI arrest. Now, we live in the video age. Most police cars today are equipped with dash cams, and it is standard practice in my office to obtain those video recordings in DUI cases. It wasn’t that long ago when almost no police cars had them, and the only real “evidence” of what took place during a DUI traffic stop was, as I noted above, the police officer’s written account of it. With video available for comparison, an officer in a car equipped with a dash-cam must always be mindful of that. Even so, it is not rare, by any stretch, to to read something in the police report that plays out differently on the video, or to see something on the video (like the rough treatment of someone arrested) that was not mentioned in the report.

Thus, we must begin with a clear understanding that the police report is not, and can never be, a completely objective record of what really took place during a DUI stop. This is not anyone’s fault, it’s just an indisputable fact that someone involved in a situation has a fixed perspective and therefore a subjective take on what happened. We all have a built-in bias simply because we’re human. Also, the ability to essentially create the story has a lot of value, as well. After a DUI arrest, when an officer goes back to write his or her report, do you think he or she would ever write anything in there about messing up, forgetting something, or pulling someone over based on a “hunch” that didn’t have any objective basis?

This is kind of a double-edged sword. As citizens, we want our police to have an “instinct” and to have good hunches, except if it’s one of us being charged with an OWI offense. Let’s set aside political correctness for a bit and assume your suburban kid is in a high drug area in the inner city, where he or she stands out like a sore thumb, or to put it another way, a customer looking for dope. You would want the police to notice that and send your kid home before he or she could score, or get hurt. You’d expect the police to be able to spot out-of-place suburban buyers. In the same way, if you live in a nice neighborhood, and a 2 or 3 really shady looking guys who are clearly NOT from the area are slowly driving down the streets at 3 in the morning, you would hope that the police would investigate. Everybody wants the police to have intuition when it comes to protecting them or their interests.

When someone winds up charged with a DUI, however, they want the opposite. If it’s you driving down a the road at 2:30 in the morning after having a few too many, you don’t want the police to follow you and watch how you drive. Often enough, when someone is stopped and arrested for DUI, they get all worked up about fairness and freedom and their rights and such. After being pulled over and arrested for drunk driving, they want to challenge anything that doesn’t look like reasonable suspicion or obvious probable cause. Every person who thinks they got caught based on a hunch will complain about it, even if that hunch turned out to be right. By contrast, if there was some burglar in their neighborhood who got popped based on a “hunch,” and not any kind of objective probable cause, everyone would be fine with that.

The police report used to be (and still is, to some extent) the place where that hunch can be made to sound more objective. In other words, when there was no camera and the person who gets pulled over for DUI and tests out at double the legal limit, who was really going to doubt that he or she was swerving? Without video evidence, reasonable suspicion for a traffic stop could easily be supplied by a police officer after the arrest.

In non-DUI cases and non-traffic stop cases, like when the police respond to a call at a home or business, absent body-cam footage, the police report will be the main evidence, if not the only evidence, of what happened. As I pointed out in the last article, we are conditioned, primarily as listeners, readers and watchers of news, to consider the police report the “actual” version of what happened. If you’re listening to the radio on your way into work and you hear a story about a robbery at the bank branch or pharmacy where you do your business, and the reporter says, “according to police, 2 suspects, one armed with a machete and the other with a rifle, demanded all the cash and then fled the scene in a grey 2000 to 2005 Chrysler minivan,” you basically believe it, right? Have you ever in your life, stopped and wondered how inaccurate the police version of events are in any such case? Of course not.

What I’m driving at is that the police report carries a certain status. This all does a one-eighty when the police report is about any of us, however. A DUI lawyer needs to approach the report more from the position that it’s all wrong until what’s in there is proven correct, rather than the other way around. When a lawyer reads a police report as a piece of evidence, skepticism is the order of the day.

Let’s look at a different kind of example:

Imagine a suburb that borders Detroit. Just on the other side of the border is a high crime, heavy drug trafficking area. The suburban police know that people drive into the city all day long to buy dope, then come back home to use it. When patrolling near the border, it is not uncommon to see a car go into Detroit and then return a few minutes later. There’s really only one reason anyone would make this trip, because locals certainly wouldn’t venture there to buy milk and bread. The police just “know” when a car has made a drug run. Would it surprise you to hear that some of the traffic stops they make are based on alleged violations that, ahem, happened outside of the dash-cam’s forward-facing view?

I’m not damning the police. I hope the officers in my city have great instincts and productive hunches so they can protect me and my family. As a Michigan DUI lawyer, however, my job isn’t to be grateful, it’s to be skeptical. I have to critically examine every police report to try and separate the objectively verifiable from what otherwise might have been a hunch, even if that hunch turned out to be right. This is rather easy if the report says something that’s contradicted by any video, but if the report describes something that supposedly happened outside the view of any camera, things are different. Given that whoever writes the report, or at least any part of it not caught by video, basically has the power to write (or, more accurately re-write) history, it is imperative to question all of it.

In my practice as a Michigan DUI lawyer, and over the course of 27-plus years, I have read more police reports than you could ever imagine; probably in the tens of thousands. Lawyers joke about this, but in every DUI police report I have ever seen, and in any you will ever read, you will find most, if not all of the following description by the officer about the driver, when making contact:

This seems to make sense, until you ask yourself how a police officer could smell anything coming from a driver’s breath when he or she is standing out in the howling wind on a cold winter night, as the driver, inside the vehicle and sitting a few feet away, speaks through the opened window? Look police officers are smart and can usually just “tell” that someone is drunk, but if all you learn about drunk driving cases and traffic stops came from police reports, you’d almost expect a DUI driver’s car to smell so strongly of alcohol that it would have a cloud around it, like Pigpen from the Charlie Brown cartoons. You’d also expect every driver to have flaming red eyes and slur like they’ve just had oral surgery. These kinds of descriptions really “ramp up” the notion of probable cause, but it’s just hard to believe that every drunk driver looks, smells and sounds the same.

The key point here is that the police report is important and should be obtained immediately, but should NEVER be treated like gospel, either. It should be read carefully, and every word of it doubted, and questioned. DUI cases are built on evidence, and for the case to stand, the evidence upon which it is based must stand up to questioning and scrutiny. A DUI lawyers job is to put it all to the test.