As Michigan DUI lawyers, my team and I spend a lot of our time acquiring, analyzing, and dealing with evidence in drunk driving cases. A DUI charge is only as strong as the evidence that supports it, and is really the foundation upon which the whole case is based. If a lawyer can block the admission of any key part of the evidence in an OWI case, that can cause the whole thing to fall apart. In this brief article, I want to reiterate the importance of the evidence, its proper analysis, and how that can be used to make things better for anyone facing a drunk driving charge. 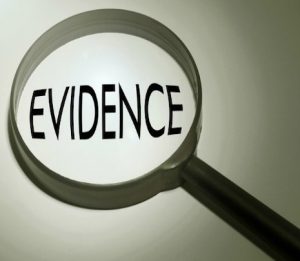 In the real world, the best possible outcome in a DUI case is to knock it out before it goes anywhere in court. While very few DUI cases actually go to trial and win (the overall percent, based on arrests for regular DUI charges, meaning OWI and OWVI, is well below 0.2% (that’s zero-point-two percent)), plenty of them do get dismissed because they do NOT survive a challenge to the evidence. This can only happen, however, if the lawyer first obtains, and then carefully analyzes the evidence, and ultimately finds something useful.

However much as one may hope there is something wrong with the evidence against him or her, the simple fact is that there either is – or there isn’t. In other words, the facts are the facts, and all the hoping and wanting in the world won’t change them. Nevertheless, it’s important that a lawyer has the ability and experience to look beyond the surface of a case, and find what others might miss. Most of the time, a successful challenge to the evidence in a DUI case is NOT based upon clumsy and obvious police mistakes, primarily because the police don’t usually screw things up like that in the first place.

Instead, it’s far more likely that anything useful will be found lurking in the details, if not downright buried in them. This is why it’s always important to obtain and watch the police car dash-cam video (and any other relevant video, as body-cams are being used more frequently now). Make no mistake, every part of an OWI case needs to be investigated thoroughly, and every bit of evidence put under the proverbial “microscope.”

You can take this much to the bank: DUI cases do not dismiss themselves.

One day, many years ago, while I was in court, a very successful, well-known and veteran trial lawyer walked in. Around that time, when he was at his peak, this guy was the bomb. As a few prosecutors gathered around to pick his brain and listen to his wisdom, one of them asked if, when he takes on a new case, he looks at each with a “blank slate” approach, and tries to see what’s there or not, or, instead, if he starts out assuming there is something wrong with the evidence, and therefore some way to beat the case.

His reply has stuck with and guided me through the decades: he said that, from a defense point of view, if a lawyer examines the evidence looking to see if there is something “wrong” with it, he or she is not as likely to find it than if, instead, the lawyer pours over the evidence assuming there is something wrong with it, and that his or her job is to keep looking until they find it.

As I noted above, the facts are the facts, and all the analysis in the world won’t change them, but the lawyer’s mindset as he or she goes about looking for something will absolutely guide and strengthen his or her efforts to do so.

Moreover, even when, as in most cases, there is nothing there big enough to completely “beat” a DUI charge, there are plenty of other things that can be found that will help drive a better plea bargain, and/or otherwise help produce a better final result.

A good lawyer knows this, while a better lawyer always keeps it at the forefront of his or her mind.

Beyond that, no matter what the evidence may be in any given case, there is also an issue of how it’s interpreted by those in the court system.

It’s a time-worn example, but if you put a 10-ounce glass on the counter and fill it with 5 ounces of liquid, some people will see it as half-empty, and others as half-full; neither are wrong.

In the context of a DUI, a lawyer must always do what he or she can to see that the evidence is perceived by those who matter in a way most favorable for the client.

This involves more than just “spin.” In fact, this is why I strongly believe in limiting our criminal and DUI practice geographically to local courts. My team and I go to the same courts, and deal with the same prosecutors and Judges, day-in and day-out. As a result, we know what works, and what doesn’t in each.

We know from experience that what will fly with one Judge will piss off another, and vice-versa. Every court is different, as are the Judges and probation officers who work within them.

For example, in some courts, a lawyer has to file separate paperwork to formally request consideration for the same kind of plea bargain that is almost automatic in other places.

Sometimes, during plea negotiations, it’s important to point out any inconsistencies in the evidence, while in other cases, that can be counter-productive. Instead, the lawyer may, in those situations, point to how the video and the police report are all consistent on a certain point, and use that to drive a better deal. This can get deep, but the bottom line is that everything about a case, good or bad, builds upon the evidence.

In the real world, it’s almost always the case that if something is found that can be used to beat (or substantially help) a DUI charge, it is discovered through careful analysis. It’s seldom the case that the person who was arrested is legally right when they angrily pound the table and tell the lawyer that the police had no reason to pull them over.

Not surprisingly, statements like this most often come from people whose BAC results were way over the limit anyway, so their recall of the facts isn’t usually very precise.

It’s the DUI lawyer’s job to evaluate the evidence, know what to look for, and keep digging until he or she has put every last thing under that figurative microscope.

Yet for all of that, we must remember that, at the end of the day, the key issue in a DUI case is whether the person was driving with a BAC of .08 or higher, or was otherwise impaired.

Underlying this question, though, is whether the evidence proves that, whether it is reliable, and whether or not the police followed the law in obtaining and processing it.

Within a few weeks of when this article was first written, a local, Metro-Detroit area police chief was arrested for DUI in a neighboring city. Maybe, years back, he’d have been let go, but drunk driving is now seen everywhere as a serious matter, and we’re long past the days where “knowing somebody” can get a person out of such a charge. A DUI charge will stand or fall based upon the evidence – nothing more, and nothing less.

The chief, in this case, didn’t get let go, nor did he get any kind of “special” break. I’m sure he regrets the whole incident, but he’s human, and like the rest of us, we all make mistakes. The chief probably learned more from going through this himself than he ever could imagine. Personally, I have no problem with him getting nothing more than a warning for this.

No matter what, the chief has the same rights as everyone else, and to the extent that he didn’t get any special break for being a police officer, he was also entitled to have his lawyer evaluate the evidence against him and challenge anything that was not legally sound. No matter who you are or aren’t, the DUI charge against you is only as good as the evidence upon which it is based. Obviously, in the chief’s case, the evidence was solid.

As DUI attorneys, one reality that we must work with is that everyone involved in an OWI arrest has their own perspective about what happened, and it can sometimes be hard to make them understand that they necessarily only see their part of the big picture. This extends to the police version of things, as well. As the old saying goes, “There’s his side, her side, and then there’s the truth.”

Unfortunately, though, there is a societal idea that the police version is (or at least should be) the most accurate account of what happened. Think of any news story that is developing: the report will always quote the police, or the police report. “According to police, the gunman entered the building and announced a holdup…”

This isn’t about political or media bias; it is a simple fact that we have been conditioned to defer to the police account as the most accurate, and/or reliable.

That might be how things should work in a perfect world, but we don’t live in a perfect world. If we’ve learned one thing since the advent and growth of the use of video in police situations, it’s that there is often a pretty big disparity between what’s in the police report and what actually happened. Moreover, not all of this is deliberate, or nefarious; it just “is.”

Imagine a baseball player standing in center field and a fly ball is hit in his direction. To him, the ball looks like it’s on a straight line to his position. To the catcher, however, the ball is moving in the opposite direction. Neither of them may realize how high the ball goes, unlike a fan sitting in the upper deck. In other words, no matter what the situation, your position, and role in it will always color your perception of it.

Our job, as DUI attorneys, is to take a step back, investigate every version of events, and try to determine the objective truth. This can often be made easier with video, which often clarifies everyone’s account.

However that shakes out, though, the bottom line is that a DUI case is really nothing more, and nothing less, than the evidence that upon which it’s based. The DUI lawyer’s job is to make the very best of things based upon that evidence.

If you’re facing a DUI and looking to hire a lawyer, do your homework and read around. Look for real information and helpful discussion. When you’ve done enough of that, start checking around.

If your case is here, in the Metro-Detroit area (meaning anywhere in Wayne, Oakland, Macomb, and even the surrounding Counties), give us a ring, as well. My team and I are very friendly people who will be glad to answer your questions and explain things. All of our consultations are free, confidential, and done over the phone, right when you call.