This article will be broken into 2 parts, focusing on how a DUI arrest is out-of-character for most people. We see a lot of OWI charges around this time of year, especially after some kind of “special occasion,” like a holiday party. As timely as it may be now, during the Christmas and New Year’s season, our examination will apply to every situation where a person goes out and drinks more than normal, and then winds up getting arrested for drunk driving. In the course of my practice as a Michigan DUI lawyer, I have learned that the usual DUI charge is the result of an unusual situation for the person facing it. 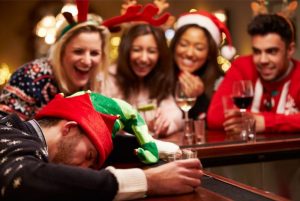 Of course, things like holiday gatherings and parties do lend themselves to people overindulging. I have handled countless DUI cases here, in the Metro-Detroit area (Wayne Oakland and Macomb Counties), arising from work-related Christmas parties, New Year’s parties, and Super Bowl parties. Holidays like Memorial Day, Fourth of July and Labor Day also provide environments where people sometimes wind up drinking more than planned, and then find themselves trying to drive home. The same goes for company golf outings and other get-togethers like concerts and sporting events.

Most of the time, people arrested for a DUI in these situations are otherwise law-abiding folks who never imagined they’d wind up facing a criminal charge. When it suddenly happens, it feels like a crisis. If the reader only takes one thing from this piece, it’s that while it’s normal to freak out over a DUI you thought you’d never get, the situation isn’t nearly as bad as you fear, and there is NO need to rush into anything, especially when it comes to hiring a lawyer. On the contrary, the best thing you can do is to chill out, gather information, and move forward making informed (rather than emotional) decisions.

As much as a DUI may be out-of-character for you, as a person, we have to monitor how the whole thing  is presented to the court (and sometimes, to entities beyond that, like a licensing authority). The last thing you should do is babble on and try to explain that you had too much to drink at the office Christmas party.

Instead of reacting in an understanding way, the court (and others) may very well think you need close probationary supervision because you work with a bunch of heavy drinkers who are not a good influence, and you can easily find yourself in another risky situation by being around people like that.

The same concern arises if a person goes to a concert, or some professional sports game with his or her close friend (or partner, or spouse), and then gets picked up for OWI (Operating While Intoxicated) on the drive home; the court may very well wonder if that friend, partner or spouse is, or has a bad influence upon you. It’s never good when the court sees dinking activities and drinking companions as part of the normal social circle for someone facing a DUI charge.

I see plenty of cases where my client is in a bowling, golf, or softball league, sticks around and drinks a little too much afterward, and then gets picked up for a DUI on the drive home. From the court’s point of view, it looks like this activity puts the person in harm’s way, because beyond the fact that these are usually pretty big drinking environments, he or she has demonstrated a susceptibility to overdoing it and then trying to drive.

In DUI cases, perception matters. The impression you create matters – a lot. In this sense, your DUI lawyer is a lot like a political consultant, and must manage how you are perceived by the Judge, the larger court system, and ultimately, beyond (like to a licensing authority, or an employer who finds out about the DUI).

This very often requires that the lawyer has to protect a person from him or herself. There is no shame in this, because no one except an experienced lawyer understands how all of this shakes out, but a person should know that his or her inclination to “explain” must be restrained.  In the real world, when people in legal trouble talk, it almost always does more harm than good. This is a classic case where you should be quiet and let your lawyer be your spokesperson.

Often enough, people will tell me that they didn’t think they were “that bad” as they tried to drive home. Although it goes beyond the scope of this article, NEVER say anything like that to anyone in the court system! The last thing you want to do is paint a picture that you can, or even think you can, “hold your liquor.” That’s the opposite of the kind of impression that we want to create!

Even worse, over the years, I’ve had many clients who chose to drive because the person they were with was even more intoxicated! What kind of message do you think that sends?

For all the things that can be said about drunk driving, and how to prevent it, the bottom line, however, is that, sometimes, a DUI just happens. When it does, it will (or at least should) be a learning experience. Hopefully, a person will take the steps to make sure it never happens again.

Of course, nobody plans to get popped for a drinking and driving charge…

In fact, most people don’t go out with any intention to drive under the influence, even though their plans don’t really take into account how they’re supposed to get home, or that, after a night of drinking, they’re unlikely to be sober enough to drive until sometime the next day. As the old saying goes, “$hit happens.”

If this is your 1st OWI charge, then calm down, because you are almost certainly NOT going to jail. With good work, jail can be avoided in most 2nd offense cases, and even many 3rd offense cases, as well.

If you have been charged with your 1st DUI, stop looking for some lawyer to “save” you from what’s not going to happen.  That’s a waste of time, money, and effort. With the possible exception of 1 district court Judge in the Metro-Detroit area, 1st offenders don’t get locked up.

One of worst decisions you can make is to rush into the office of some lawyer on the basis of avoiding jail, not just because, as I’ve noted, 1st offenders DON’T go, but because if that’s the sales pitch being made by some lawyer, it’s both deceptive and completely misses what’s really important.

In the real world, there are plenty of other legal consequences we need to avoid and/or minimize, like safeguarding your driver’s license and your ability to drive to work, protecting your record, and keeping probation manageable.  Because these are the kinds of consequences you will face, this is where you and your lawyer should be focusing

A good DUI lawyer will go out of his or her way to provide information that addresses these things upfront. Your concerns and efforts should be directed toward the things that matter – the things that may or will happen to you – not to some far-fetched and improbable notion of jail time.

It’s normal, of course, that once a person gets released from jail following a DUI arrest, his or her first priority is to never go back. Once they’ve gotten the vehicle out of impound, gone home and had a shower, they’ll usually start looking online for legal information. In fact, there’s a good chance that’s why you’re reading this right now…

As you look around, it’s important to understand that most legal marketing is fear-based and designed to respond to the urge to find a lawyer quickly. Good people tend to be shaken up by this whole experience, and want to be protected. While those feelings are normal, they should never override a person’s better judgment. You should never hire a lawyer (including me) without doing a little comparison shopping, first.

This runs contrary to the goal of most legal marketing. If you take a step back and look at the bigger picture for a moment, you’ll see that the last thing any lawyer or law firm wants you to do is leave their site and look around.

For my part, however, I truly believe that’s the best thing you can do. The only harm in becoming an educated consumer is to those who want you to remain ignorant. There is simply no good reason, ever, to not check out your options.

In fact, any law practice that is afraid of comparison shopping should be avoided like the plague. As a DUI lawyer, I want my clients to pick me, not be scared into calling my office. I hope to be chosen because of the helpful information I provide, not because of catchy slogans, or because I was the fastest to respond to an email.

Your job, as a consumer of legal services, is to “screen out” potential lawyers as much as you need to look for the one that’s right for you. Don’t fall for fear-based marketing or cutesy slogans full of self-praise.

Search, instead, for real information and analysis, and, as you do that, don’t just look for what you want to hear.

For all the warnings I could issue, the bottom line is that you need to become a smart shopper. That will never happen if you rush into anything or don’t take the time to really check around.

Because of things like this blog, and the way we do consultation (over the phone, when you call), my practice is very different from some “phones answered 24 hours” operation. Heck, even hotel room service isn’t open 24 hours.

Always remain a bit skeptical of everything you read and hear. Being honest, and giving both the good news and the bad news is a lot harder for a lawyer than just making everything seem like it can all go away.

Being upfront not only requires a certain kind of integrity and strength, it can also take money right out of a lawyer’s pocket, because no matter how much people should know better, there is a natural inclination to buy into what you want to hear.

We’ll stop here for now, and pick up again in part 2.