Ignition interlock violations are fairly common in Michigan driver’s license restoration cases. In this relatively compact, 2-part article, I want to focus on the worst kind of violation: a start-up failure where the person just walks away from the vehicle, and does not, thereafter, obtain either a PBT or EtG test to show he or she hadn’t been drinking. I wish there was some way that this piece could be read by everyone on an interlock BEFORE they run into any trouble, but the reality is, most people will find it when they’re looking for help after something has gone wrong. At a minimum, what we’ll cover will help explain why this specific type of interlock violation is so problematic. 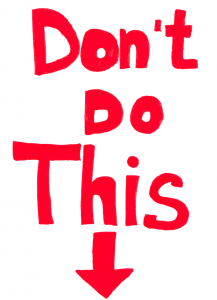 Before we get to that, we should clarify the term “violation.” Everybody, including the Michigan Secretary of State hearing officers, uses the word “violation” to mean 2 very distinct things: first, to describe an event or incident that fails to meet the requirements of proper interlock use, and second, to describe a formal hearing scheduled when any such incident(s) results in someone’s license being revoked all over again. Things would be much clearer if we described the former as something like a “non-compliant incident,” and the latter as a “violation hearing.” Don’t hold your breath for that, however.

Instead, any missed rolling retest, startup failure, tamper/circumvent or positive breath test result is simply, albeit erroneously, called a “violation.” Under the interlock rules, if a person has even 1 missed rolling retest or a tamper/circumvent, he or she is formally “violated,” and his or her license is revoked all over again. As if what we’re talking about isn’t confusing enough, that re-revocation of a license is technically called the “reinstatement of original action.” The only way for someone to get their license back is to request a hearing within 14 days from the date that reinstatement of original action (the revocation) goes into effect, which is usually about a week or so after he or she receives a notice of the violation from the Secretary of State.

The hearing that’s convened to decide a violation is, not surprisingly, called a “violation hearing.”

Assume, for example, that Dan the Driver makes it through his mandatory year on the interlock. Although he had 2 separate startup failures during that time, neither of those amounted to what is called a “major violation,” and he was not, therefore, formally violated. When Dan requests a hearing for a full license, and is sitting in front of a hearing officer going over his ignition interlock final report, any and every incident where he tested positive for alcohol (including and especially those 2 startup failures) will be called a “violation,” even if none of them, on their own, resulted in a formal violation hearing.

If you’re still a bit confused, then you’re actually following along as you should be…

When a person shows up for his or her “full” license hearing, he or she will be asked to explain, in detail, what happened to cause each and every positive test result (or violation), and whether or not he or she thereafter obtained a confirmatory PBT or EtG test.

Thus, we circle back to the idea that any missed test, positive-for-alcohol test result, startup failure, or tamper circumvent incident is called a violation, but only certain ones among them will result in an actual violation hearing.

In the real world, though, pretty much all of these things get lumped together under the term “violation.” Although it’s not a perfect analogy, this all kind of compares to the word “car.” A car, technically speaking, is a sedan or a coupe. It’s not quite the same thing as an SUV or a pickup truck. However, if someone asks, “what kind of car do you drive?”, you know what they mean, even though your vehicle may be a pickup truck. If you can get the “loosey-goosey” meaning of that, we can move on and all be on the same page.

There are lots of good and innocent reasons why a person may have a violation (in this context, I mean an incident of non-compliance). In tamper-circumvent cases, for example, the most common reasons are a dead battery, or that the power is disconnected when work is being done on the vehicle. The Secretary of State has a protocol for repair facilities to follow so that if they disconnect the power, it doesn’t count as a violation, but we see those things get screwed up all the time.

When it comes to positive breath test results, there can be all kinds of explanations, including having consumed food or beverages that give off a brief alcohol reading, having alcohol in the air, through things like hand sanitizer, colognes, and even windshield wiper fluid, or having used some other product that gives off “environmental alcohol.” As we’ll see, these things may cause a positive-for-alcohol violation, but they are usually rather distinguishable from a positive reading resulting from the beverage consumption of alcohol.

The state, for its part, goes out of its way to make clear what a person should do to avoid a violation in the first place (meaning to avoid any non-compliant incidents) by including a detailed set of instructions for proper ignition interlock use in every order it issues when someone is granted a restricted license.

The state also makes clear that it is the person’s duty to fully read and fully understand those directions.

In a perfect world, everybody would (and should) do just that.

We don’t live in a perfect world, however, and most people read just enough of their orders to know they’ve won their appeal, and then move on to find out where and how to get the interlock unit installed, how to get their license, and how to use the device to get the vehicle started and keep it running. Beyond all that, most people just don’t worry too much about the alcohol thing because they have no plans to drink.

That’s a mistake. The notice of proper ignition interlock use is there to avoid mistakes and problems that commonly occur, even when someone has NOT consumed any alcohol, and to guide the user when things do go wrong, as they often do. This is relevant to any positive start-up tests, and especially important to start-up failures.

We have to start with this simple proposition: when the machine detects alcohol, it detects alcohol. Whatever the source of that alcohol, the interlock units are almost always right about the presence of some form of alcohol. Unfortunately, the machine has no way of knowing whether or not any alcohol detected comes from yeast in the dough of a pizza crust, or leftover booze from the night before.

Therefore, when the Michigan Secretary of State learns of any positive-for-alcohol reading, because of the way the rules are written, it assumes that it is the result of the beverage consumption of alcohol, and requires the person on the interlock to prove otherwise. The obligation to meet this burden of proof is spelled out in the law AND the instructions that accompany every winning restricted license appeal order.

Those instructions make clear that when a person has any positive-for-alcohol breath test result, he or she should promptly get a PBT breath test at a nearby police station, or, if that’s not possible, get an EtG urine test by the end of that same day to prove that he or she had not been drinking.

If the Secretary of State is to be faulted for anything, it’s that the instructions included in winning orders strongly recommend that a person get a PBT or EtG test after a positive breath sample.

That language is inaccurate and misleading, to the point of almost being damn near false, because in practice, the hearing officers who decide these really expect a person to obtain a PBT or EtG test after any positive breath test.

In fact, it would be fair to say that the state basically requires such tests, and that’s certainly the case anytime there is a startup failure.

If a person shows up for either a violation hearing or full license hearing and does NOT have a PBT or EtG test following any positive blow, he or she will be asked why they don’t have one. In other words, and to kind of reiterate what I just said, in practice, that the hearing officers essentially expect that anyone who provides a positive breath test sample will follow up with a PBT or EtG test and bring it with them to any subsequent license appeal or violation hearing.

This is not so clear from reading the directions on the order granting a restricted license, though. Instead of saying that “it is strongly recommended,” that a person should obtain a timely PBT or EtG test following a positive-for-alcohol sample, the Secretary of State should really update its notice to make clear that if a person does have a positive-for-alcohol interlock reading, getting an independent test is really expected.

However, according to the Secretary of State’s instructions, getting a PBT or EtG test is not the first thing a person should do following a start-up failure. Those instructions are pretty clear: the state’s notice advises that if a person cannot get his or her vehicle started because of a BAC of .25 or over, he or she should stay with the vehicle, rinse his or her mouth with water, and continue to test until the vehicle does, in fact, start.

Lots of things beyond the beverage consumption of alcohol can cause a positive BAC. The catch, however, is that when any of those things occur, the person’s BAC will almost always drop quite rapidly, and in a way very different than it would had they been drinking. This is true even if a person ignores that part of the instructions that advises against using a mouthwash that contains alcohol.

This is one of the main reasons that the state advises staying with the vehicle, because the follow-up tests will show the person’s BAC numbers decreasing quickly, and that decrease should be readily distinguishable from the metabolization of alcohol that was actually consumed by beverage.

Should be, but not always. The simplest way to put this is that “$hit happens.” This is why an independent follow-up test should always be obtained.

These follow-up tests are really a key part of a defense to a start-up failure. The state is very clear about NOT leaving the vehicle, rinsing one’s mouth with water, and continuing to test.

It is also “strongly recommended” that a person obtain a PBT or EtG test AFTER he or she has remained with the vehicle and continued to test.

That said, it really wouldn’t be a problem if someone immediately left the vehicle and went to a police station, thereby skipping the “stay with it” instruction, and obtained a timely PBT. In the real world, though, that never happens.

Bailing out on the vehicle really becomes a problem when, instead of promptly getting a PBT, or at least following up later that day with an EtG test, the person does nothing.

To all the world, it looks like he or she drank the night before (or whenever), thought they’d be clean by the time they had to blow, and then found out otherwise. Because the person knows that any subsequent tests would just confirm the presence of alcohol, they not only stopped blowing in the interlock, but skipped getting a PBT or even an EtG later on.

The state, however, will see the absence of any missed tests as confirmation of the inherent suspicion that a person had been drinking. Remember, this all starts because of an interlock test result that is positive for alcohol.