Possession or use of marijuana is still a criminal offense in Michigan unless you have a medical marijuana card. [Author’s note: as of November, 2018, the ballot initiative to legalize marijuana has passed.  HOWEVER, until a law is crafted by the legislature and takes effect, possession of marijuana remains illegal for those without a medical marijuana card] This article will focus on possession charges for those without medical marijuana cards; there are plenty of lawyers who concentrate in the medical and business end of “cannabis law.” I’m not one of them. My goal here is to focus on the person caught smoking or otherwise in possession of weed intended only for recreational use. The writing is on the wall with respect to marijuana, and sometime in the not-too-distant future, recreational pot will certainly be legal, but it’s not as of now, and you’ve probably found this article because you’re facing a possession charge. Beyond the legalities involved, which aren’t really all that complicated, I want to direct our attention to how these cases are typically viewed by the courts. 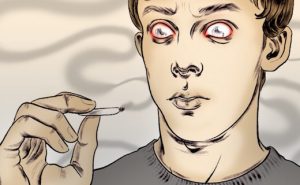 This is probably the most important perspective to consider, although it’s overlooked by just about everyone (including lawyers) when writing anything about marijuana and the law. At the end of the day, recreational marijuana is still an illegal drug. If you’ve been charged with a crime involving it, your lawyer had better understand how the Judge in your case views these things. I make my living in the courts of Metro-Detroit, meaning all the district and circuit courts of Oakland, Macomb and Wayne Counties. I don’t know of any Judge who is “for” pot, or otherwise supports the legalization of marijuana for recreational use.

In fact, compared to someone caught smoking weed in a car, most Judges are pretty conservative people. That’s not to say they didn’t live a little, or have some fun when they were younger. Nor, by the way, am I implying that there is anything wrong with anyone who ever did or still does use marijuana recreationally. The point I’m making here is that there is a pretty big difference in attitude and outlook between a person found with a bag of weed on his or her person and the Judge, sitting in a courtroom, who will be presiding over his or her possession charge. Some Judges are way more conservative than others, and view marijuana as just one of many dangerous and illegal drugs. It’s very important to realize that not understanding this perspective as an integral part of handling a possession case means a lawyer is ill-equipped to do so.

Believe me, I get it. I’ve heard it all, from highly educated professionals who are embarrassed beyond words because they’ve been busted for pot, to folks who have to “vent” a little about what they feel is the ridiculousness of facing a criminal charge for something as benign as marijuana. Even those who feel strongly that marijuana should not be illegal (they’ll often say something like, “This is bull$hit!”) realize that you can’t talk that way in front of the Judge. That’s why, if they need to blow off a little steam, better that they do it in my conference room, rather than the courtroom. Understanding the Judge’s mindset as he or she looks down at you from the bench is fundamental to getting out of this mess as leniently as possible. For the most part, it’s routine for me to be able to keep a possession charge completely off my client’s record, but that’s far from all there is to this.

You must first understand this simple fact about the law: there is no way too keep any drug charge off a person’s record without there being some period of probation. In other words, short of having the whole case tossed out of court (and unless there is a clear legal basis, that’s NOT going to happen), the law requires that a person go for at least a short period of time without getting in trouble before the charge can subsequently be dismissed. This is what lawyers mean when they speak of “deferrals” or “under advisement.” The upshot here is that in order to keep something off your record, you’re going to be on some kind of probation for however brief a time. Sure, there are a few places and some circumstances where all you need to do is NOT get arrested again for 90 days and the case goes away, but in the overwhelming majority of courts, the standard period of probation is for a year (9 months, if you’re lucky) and you’ll be required to remain both alcohol and drug-free for that period, and will have to periodically test to prove you are.

Some courts are inclined to pile it on, and consider longer periods of probation, more frequent testing, and requiring things like marijuana classes or substance abuse counseling, not to mention community service. This is the kind of stuff you need to avoid, but you can’t (or at least shouldn’t) just stand there and tell the Judge, “Hey, don’t pile all this on me, man, it was only a little bit of weed!” It’s important to know these 2 things: first, that all Judges stand for the law – even laws they may not like, and second, every Judge has his or her own particularities ( and in some cases, peculiarities). Thus, as a lawyer, I need to work within the general mindset of how marijuana is treated by all Judges, and then take into account any idiosyncrasies or special considerations of the particular Judge deciding my client’s case.

As I noted before, there’s no Judge who is in “favor” of marijuana.  No matter how harmless pot may be in the larger order of intoxicants, Judges and prosecutors still think of it as an illegal drug and are wary of it and those who use it for fun. In that regard, the system’s collective opinion of those who smoke marijuana is not favorable.  Judges fear that pot defendants are more at risk to be amongst those who are unsuccessful, uneducated, and unmotivated.   My job is to make it clear to the Judge that you are an exception to this “type.”

You simply can’t afford to ignore this reality because it shapes everything about your case and what will happen to you. As I often say about DUI cases, success in a possession case is ultimately evaluated by what does NOT happen to you.

I point this out because it needs pointing out. If we don’t have these somewhat uncomfortable conversations now, then how are you going to make the best of your case in court? What I’m talking about here underlies every single possession of marijuana case in every single courtroom. There are no exceptions. Ignoring it, or not talking about it doesn’t make it any less a prominent reality. If your lawyer is going to go and make things better for you, then this kind of honesty marks a necessary starting point.

In the real world, younger people get caught with marijuana more often than older folks. This
may not reflect anything significant about the demographics of marijuana users, but it does
significantly impact who the Judges see in their courtrooms. And the fact is who the Judges see
with pot charges feeds right back into the ugly perception I spoke about earlier.

Judges see that highly educated, successful pot defendants are usually the exception, rather than the rule.

Is this in accurate picture of all, or even most marijuana users?  No. Unfortunately, it is the perception that we have to work with.

Does this mean you are out of luck if you fall into the “common” demographic that a Judge sees? No, because I know how Judges first perceive and then ultimately evaluate people charge with marijuana possession, and I work from the beginning of the case to set my clients apart.

In other words, my job isn’t to change a Judge’s mind about marijuana, but rather about YOU.

Again, I’m not trying to insult the reader, but I would be remiss for not pointing this out because it is FRONT AND CENTER relevant to any pot case where the defendant is not older. And if the defendant is older, but hasn’t done too well in life, you’re kidding yourself if you don’t think the Judge is going to conclude that smoking pot and the whole “partying” thing didn’t play a part in that. It might be better marketing for me to not write this way, and instead chime in and bitch about the marijuana laws, but you need a lawyer to help you get out of trouble, not get deeper into it. Whatever situation you face in life, it’s always better to confront it with your eyes open. There is a certain context to every possession of marijuana case in the court system.

The goal here, and the end result I produce in each case I take, is to make things better for my clients. I know which Judges are more “old school” about marijuana, and which Judges won’t even consider allowing a person to obtain or use a medical marijuana card once he or she is facing a possession charge. I know, more than anything else, how to be the diplomatic spokesman on behalf of my clients while also explaining to them how the court sees things. In other words, as much as I have to tell my clients “how it is,” I also have to do something similar to the court, albeit in the most respectful way possible. Whatever else, if you want to win like a lion, you can’t squeak like a mouse.

There is more we could explore here, but I think we’ve hit the main point, that in order to produce the best result in a possession of marijuana case, you need to account for both the court system’s overall, general perspective about weed, and the specific “take” of your particular Judge. If you’re looking to hire a lawyer to help you out of a marijuana charge in any Oakland, Wayne or Macomb County court, I can help. Do your homework and read around. See how other lawyers explain this, and then, when you’re ready, start asking questions. All of my initial case screenings are done over the phone, right when you call. My office is open Monday through Friday, from 8:30 a.m. until 5:00 p.m., and can be reached at 586-465-1980.