As a Michigan criminal and DUI lawyer, about 2 of the most common questions that I’m asked are, “Am I going to jail?” and “Can you keep me out of jail?”  Even the quickest look at a sampling of DUI lawyer websites reveals that the whole “Avoid jail!” theme is used everywhere, by everyone.  It seems to be the strongest pitch a lawyer can make for your money.  I’m no exception; I make it, too, and I know that if I was in a pickle, staying out of jail would certainly be my first and biggest concern.  However, as I have pointed out in many of my various DUI articles on this blog (as well as my website), in the kinds of drunk driving cases and clients I handle, jail is usually not, for the most part, even on the menu.  But the cold truth that I have not seen addressed (until now) on any lawyer site is that some people do, in fact go to jail., and you can be sure that the folks sitting there didn’t book themselves in voluntarily. 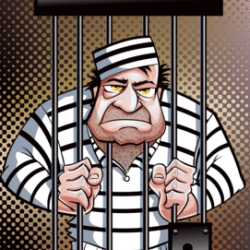 It is generally understood that, as a lawyer, talking about this isn’t good for business.  That’s why attorneys avoid it like the plague.  That’s also a disservice, however, to someone seeking real world information about what happens after a drunk driving arrest.  Of course, it’s my first goal to avoid jail as much as possible, in every situation possible, but even the WORST lawyer out there has the same goal, although perhaps not the skill to do it quite so well.  There is no hard and fast rule about who does get some jail time as opposed to who doesn’t, but there are a few helpful observations we can make to clarify things a bit.  On the one hand, if you’re facing a 1st offense DUI, you’re not really facing any jail time.  On the other hand, someone with a bad record has a much better chance of doing some time than a person with no prior record.  I addressed this in a recent article, and common sense is a pretty good guide here.  If you’re facing your 5th DUI, then yeah, you can count on some time.  Beyond that, however, there is a mix of variables that figures into all of this.  Some jurisdictions are really tough, while others are much more forgiving.  In fact, one Judge can be way more lenient than another would be in the exact same situation.  You also have to include the prosecutor in this mix of variables, as well, because not only do individual prosecutors from the same office have different approaches to things, but some offices are much more flexible than others.

Our discussion here will be limited to the things I handle my own practice: DUI cases and criminal cases involving things like suspended and revoked license charges, drug possession, and other misdemeanors and lower-level felonies, mostly for professionals or other good wage earners. meaning good people caught up in a bad situation.  For the most part, if you’re a solid citizen and haven’t been in trouble before, and you’re facing something like a DUI or suspended license charge, jail isn’t really on the menu at all.  Even if you have had a prior scrape with the law, including, perhaps, a prior DUI, you’re still probably safe in almost every one of the courts where I practice.  But here’s where things get dicey:

If we take a 2nd offense DUI case as an example, there are certain courts in the Detroit-area where it’s essentially a given that you can avoid jail altogether.  That’s great news, at least if your case is one of them.  However, there are also certain Judges that will, no matter what, hand out jail in 2nd offense cases.  What’s that?  Someone you know has a lawyer who “knows” somebody, or who can otherwise get you out of that?  Bull$hit.  Ask for a guarantee then listen to all the excuses you get in response as to why not, remembering that I give one in every driver’s license restoration case I take.  A really good, really honest lawyer knows that, in certain cases, the best you can do is just minimize that jail time.

Interestingly enough, my likely reward for this article won’t be a flood of new cases.  In the real world, people still buy into what they want to hear.  It is human nature to prefer what we want to hear over what we need to hear, but it is also, I believe, morally wrong to exploit that.  For as long as I have been a lawyer, I’ve said that the one thing – the 4 words I NEVER want to hear from a client – is an angry, “But you told me…!”  I just don’t have it in me to abuse someone’s trust, and I have no heart to lie just to get their money.  Nor, for that matter, do I ever want to be thought of as having “duped” someone.  I was speaking with another lawyer once who was half joking that having a conscience had cost him a lot of money over the years.  It may be funny, but it’s also true.

Another colleague of mine once complained about how certain expensive DUI operations will charge the anxious and hopeful client a fortune, put on a good show about how they’re going to attack the case, start requesting documents from all over the place, and impress the client with all the work going on, the avalanche of documents and flurry of activity, thereby keeping him or her hopeful for a (lucky) break.  As my friend so accurately described it, after what looks like a ton of effort, the lawyer shows up in court one day and then walks out of a meeting with a prosecutor, face drawn in a grimace of disappointment, and then says something like, “Well, here’s the problem…”  And there goes the person’s hopes, and his or her money, as well.  In a word, someone just got taken.  The person who got fleeced probably looked past a dozen honest lawyers who didn’t make everything sound too good to be true, and then suddenly realizes the mistake in being so quick to jump at what they hoped for, rather than what was more realistic.  Or not.  It’s kind of the same thing with speaking candidly about the possibility of jail.  Or not.

To be perfectly honest, it’s hard to sit across from someone who’s anxious and worried and nervously asks if they’re going to jail, or if there’s anything that can be done to avoid that, and not be reticent to give them bad news.  A younger, less experienced lawyer will not only be afraid of scaring the potential client away and losing the business (can you imagine this reply: “Well, Nervous Nellie, it doesn’t look good; you should probably start getting ready to make some new friends in your cell block”?), but will also feel the tug at his or her heartstrings.  You a special kind of $hitball if you don’t want to offer someone reassurance when they seem to need it most.  It’s hard to tell someone almost exactly what they don’t want to hear.  In the final analysis, though, either you’re honest, or not.

Of course, being honest and doing the right thing can be very different than the doing the easy thing.  The world is full of shysters selling diet pills (I like the one where the add says that if you start losing too much weight, take the pill every other day, instead), exercise contraptions (buy the twist-board and you’ll shimmy your way to the perfect body), pain-relieving arm and leg bands, and all kinds of too-good-to-be-true things.  When you’re in trouble, you don’t need someone to lie to you.  I have found that being very open and honest with a person, in a calm and diplomatic way, never sets them off.  People appreciate being treated honestly, even if it means hearing something unpleasant.  Life can be tough at times.  The person with a bad prior record who is facing a 3rd probation violation for testing positive while on probation certainly hopes to avoid jail, but also knows that perhaps the best that can be done is to keep a 30-day sentence at bay, and limit it to something like a weekend, instead.

This isn’t to imply that most lawyers will lie about jail.  In fact, I’m sure the overwhelming majority of lawyers would NOT lie.  I just think that many will “deflect” the question, or answer in a way that kind of sugar-coats things.  The reader may remember the old saying, “If you can’t dazzle them with brilliance, baffle them with bull$shit.”  The problem is, though, that a strategic non-answer like that doesn’t help anyone’s situation.  To complicate all this, however, you’ve got some lawyers who make it sound like anything less than the complete dismissal of all charges brought against you is a sell out.  Yet when you look at bit more closely at those operations, you can see that they’re far more like carnival barkers than anything else.

If there’s any real takeaway here beyond what we’ve covered, it’s that you need to be a good and smart consumer as you look to buy legal services.  You can say “retain counsel” and make it sound all highbrow, but at the end of the day, you’re still (and only) buying legal services.  Perhaps the best way to get a handle on your situation is to read as much as you can in articles like this, and then speak to as many lawyers as you can.  When you run across those who make things sound too good, then you know they probably are.  If your direct questions are deflected, that’s a clue, as well.  And remember, like I noted at the outset, for pretty much anyone with no prior record, or at least a record that isn’t that bad, jail isn’t likely, anyway, so don’t put too much stock (or money) into that kind of fear-based marketing.  Jail is way more of an issue for someone with a more serious prior record.

And that’s kind of the flip side.  As much as lawyers teThend to avoid talking about jail when it does loom as a realistic possibility, don’t be swayed by those who make themselves seem like some grand savior who will protect you from it, especially when, like in the situations I’ve discussed in this article, it isn’t even on the menu, anyway.  That’s just getting screwed over in a different way.

If you’re facing a criminal or DUI case in the Metro-Detroit area, meaning anywhere in Wayne, Oakland or Macomb County, and you’re looking to hire a good, honest lawyer, then we should talk.  You can reach my office Monday through Friday, from 8:30 a.m. until 5:00 p.m., at 586-465-1980.  We’re here to help.