It’s been a while since I’ve written about my pre-hearing “prep-session” that I have before every driver’s license restoration or clearance hearing I handle.  I do these preps with all of my clients, and feel that it is not only key to my success, but also helps alleviate much of my client’s pre-hearing stress.  It’s normal, as the hearing date approaches, for a person to be apprehensive and nervous, so I want to help my client gain a sense of calm, and confidence.  When I’m done, beyond merely having made my client ready for the hearing, I will have also demystified the whole hearing process for him or her so that they understand there’s no real reason to be fearful.  It is important that when my client walks into the Michigan Secretary of State’s Administrative Hearing Section (AHS) hearing room, he or she knows exactly what to expect.  Equally important is that my client has the security of knowing he or she doesn’t have to remember any sketchy details of some kind of BS story, because we’re going in to tell the truth. 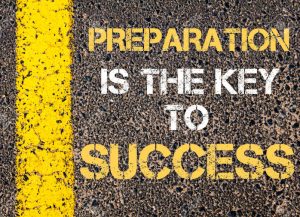 As much as preparing for the hearing is really about the client, and for all it involves, the process begins with me reviewing his or her file.  I chose those last few words carefully, because although it would almost sound the same had I written “…reviewing the file,” I never lose sight of the fact, and I have to  make sure the hearing officer also never fails to understand, that the decision he or she will be making is about a person, and not just a “file.”  It can be easy, in larger, institutional settings, to think of a person as being synonymous with his or her case, or file.  Dan the Driver may have license appeal case number 123456, but what’s inside that file is all about a 3-dimensional person (Dan), and equate to a lot more than just a 2-dimensional stack of papers.  When I open a client’s file for prep review, I read every last thing in it, and take the time to memorize it.  As someone’s lawyer, I not only need to have instant recall of every bit of evidence in the case, but also how that 2-dimensional evidence fits into the context of my client’s 3-dimensional life.  Before I pick up the phone to call my client, I will not only have memorized his or her case, but also how it reflects his or her individual and personal recovery story.

This matters beyond just sounding like some kind of good “We care about you!” sales pitch.  Thorough hearing prep requires a hell of a lot more than just some generic “heads up” about the kinds of questions that will be asked.  All of my hearings are held in the Livonia Hearings and Appeals Office, where 5 hearing officers preside.  Each one has his or her own particular concerns about sobriety and the license appeal process.  A key focus of my preparation will not only focus on the particular hearing officer, but the concerns and questions he or she will have about each specific case.  This means that if Sober Sandy’s evidence shows she attended AA while on probation, but no longer goes, the questions she will be asked by one hearing officer about why she no longer attends will be different than the questions put to her by a different hearing officer under those same facts.  And if this isn’t enough, those questions will be different if Sandy has never attended AA, and different still if she claims to currently go to meetings.  The point is that each case is one big set of fluid variables, and the hearing officer is another set of mixed variables, and preparing of a hearing requires me to know all of them first, and then connect those that are going to be relevant.  Anything less is, well, unprepared.

I find it most advantageous to do my preps as close to the hearing as possible.  I will usually call my client the evening before his or her hearing, and typically after hours, at that.  Sometimes I will reach out to a client earlier, but that’s on me, not the client, so if we don’t connect then, we will later.  Our default understanding is that I will call the evening before the hearing.  Because of my schedule, I cannot set a time certain for that call, and have been known to ring someone well after 10 pm.  To date, and for the thousands of cases I have handled, I have NEVER gone into a single hearing without having prepped my client first.

Over the years, I have refined my prep sessions, and, thankfully, shortened them, as well.  Whereas they used to require an hour or more, I now complete them in about half that time, and sometimes less.  Even though the prep season takes place close to the end of the license restoration process, there is a direct connection between the prep and the first 3-hour meeting I have with every new client.  I don’t know how else to explain this, but if you’ve ever read a book by a really good author, or watched a particularly deep and well-made movie, you’ll see how little details from early on wind up connecting to things later on.  These things, sprinkled throughout, make you go, “Ahhhh,” and appreciate the artist’s skill.  Normally, the ability to do that comes from experience that has been refined over the years.  It’s generally not the kind of stuff you’ll find in first novels, but rather something you’d expect from a veteran writer who has a much larger body of work.

In the case of my license hearing preps, the client and I will connect some of the more salient and/or relevant aspects of his or her recovery story (sometimes, these are referenced in 1 or more of the letters of support) to the expected questions.  As confusing as this may sound, it’s as simple as identifying certain themes within a person’s journey to sobriety.  Because these tend to naturally show up in letters of support, and because I will have essentially memorized the letters (at least the gist of them if not the exact language), it becomes easy for me to tie all this into a nice, neat bow as I present the case.

Another important fact about license appeal hearings is the split amongst the hearing officers in terms of who asks most of the questions.  In Livonia, 3 of the 5 hearing officers prefer that the lawyer do most of the questioning, while the other 2 would rather have the lawyer set things up and then kind of “step aside” so that they can handle the bulk of the inquiry.  Obviously, I have more control over the development and presentation of the story when I’m the one doing most of the questioning, but as I noted in the opening paragraph of this article, the hearing is about going in and telling the truth, so even when the questions are primarily in the hands of the other, more “traditional” hearing officers who prefer to be more hands on, this isn’t any kind of big deal.  In fact, it’s exactly why we’ll be having our pre-hearing prep session.

Truth be told, there is a kind of magic, or “secret sauce” to all of this, although it may not look much like it.  If you go to a symphony performance, for example, you’ll see the conductor on the podium wielding the baton, but it usually seems like the orchestra could do fine without him or her.  What you don’t see, and the reason a good orchestra looks like it could manage on its own, is all the preparatory work and rehearsals that went into the performance.  In the early stages of rehearsing a particular piece, it is the conductor who tells the horns to pipe down a bit and the cellos to play with more force.  He or she arranges everything so that the many parts come together in just the right way at showtime.  I’m not saying that I’m any kind of world-class conductor, but in my own small, guaranteed to win your license appeal way, I serve the same function.  And for all the experience I have, there is a kind of “you either have it, or you don’t” aspect to this.  I know some really great lawyers who could argue the ink off of the constitution itself, but they wouldn’t fare well in the license appeal setting.

Some of this comes from my passion, and I believe that I energize my clients with some of it from the moment we meet until the last word in the hearing.  I have a kind of instinct for this, sort of like a “sense” to read a case and the room and the hearing officer and just “feel” what’s going on.  Having lived through just about everything that could ever happen at a hearing, I know how to prepare my clients well without wasting time on things that won’t come up.  Why be prepared for questions that won’t be asked, and why review information that isn’t relevant, both to your case in general and to your assigned hearing officer, in particular?

All this means we’ll spend at least a half hour going over those things that will matter in your case.  As it turns out, my prep sessions often last longer than the hearing itself.  The next day, we’ll meet in the lobby of the hearing office, and as we wait for our case to be called (individual cases are scheduled at 9, 10 and 11 a.m., and 1, 2, 3 and 4 p.m., and start promptly at the appointed hour, very much unlike court, where the set time is more or less a “cattle call”), we’ll talk about the weather, or the news, or anything other than the case itself, because we’ll be ready, and you won’t be afraid.  Sure, it’s normal to feel a bit of apprehension no matter what, but when you know all you have to do is go in and tell the truth, and you know what to expect, that sense of abject fear goes away, and is often replaced with a keen desire to go in an get it done.

For more angles to this, the reader may pick up a few more things from some of my other “prep” articles within the driver’s license restoration section of this blog, and I’m sure between all of them, get a rather comprehensive look at why I believe the prep is so important as well as how I do it.  Of course, anyone looking to hire a lawyer for a Michigan driver’s license restoration or clearance appeal should do his or her homework.  Read what you can (you’ll find way more here than everywhere else combined), then check around and ask question.  When you’re ready to know the joy of wining your license back, call my office.  All my consultations are done over the phone, right when you call, and you can reach us at 586-465-1980, Monday through Friday, from 8:30 a.m. until 5:00 p.m. eastern standard time.  We’re here to help.