Perhaps the single best and most valuable piece of legal advice that can be given to anyone being questioned by the police is to “shut up.”  Seriously, don’t say anything.  In my role as a criminal, DUI and even driver’s license restoration lawyer, if I could wave a magic wand and get my clients to do just one thing, it would be to keep quiet.  In this article, I want to take a quick and simple look at the value of silence, and how the natural urge to speak complicates just about everything.  Chances are, if you’re reading this because you’ve been charged with a crime , a drinking and driving offense, or need to get your driver’s license back, and you’ve probably said things along the way that you’d like to take back.  Although less frequently a problem in DUI cases, a situation just crossed my desk yesterday (the inspiration for this article, in fact) where someone who should not have said anything probably talked themselves right into a drunk driving charge. 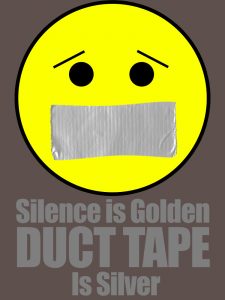 In that case, the person (I will use “he/she” or “they” to avoid even a gender identification) had been in an automobile accident caused by the other driver.  This person left the scene, but the other driver got the plate and the police showed up at his/her home.  The person was rather drunk when the police came, and when asked about whether he/she had been drinking before driving and at the time of the accident, the person admitted to having done so, and having been drunk at the time.  Subsequently, the person tested out with a rather high BAC.  Although I cannot say much more, charges will be coming.  The problem here is that had this person simply NOT said anything, the police would have been faced with an almost certain inability to prove that he/she was over the limit at the time of the accident, effectively killing the likelihood of a drunk driving conviction.

I see this all the time in criminal cases, as well.  Let’s use an indecent exposure case for an example.  Imagine the police get a call about a guy exposing himself while driving on Main Street.  The caller can’t give a great description of the driver, but does give a license plate number.  Running that information, they identify the car as belonging to Fred, and the police contact him.  They ask Fred if he was anywhere on or near Main Street at the relevant time, and he answers “yes.”  With that answer, Fred has just seriously helped the case against him.  Now the police know that Fred was in the area at or around the time the caller said she was flashed.  Had Fred just said nothing, the police would probably not be able to prove he was even in the area, much less that he flashed anyone.  Fred, like so many people, probably had pangs of guilt and the inner turmoil of just knowing that the police “know” (knew) that he did it, so he thought it would be better to be honest.  To be clear, in most cases, the police do “know.”  Cops are smart, and most police officers develop a better sense of human nature than anyone in any other profession.  A street cop learns to read facial expressions and body language in ways you and I will never comprehend.  Still, “knowing” something is one thing, but being able to prove it is quite another.

Let’s look at another example:  Imagine that a hypothetical police officer is close with his sister and her kids, and they all love “Uncle Johnny.”  The sister and her children move to another state, and then one day, the police officer brother gets a frantic phone call; his sister tells him that a detective has called the home and wants to talk to Timmy, her oldest son (his nephew).  The detective says that a car matching the description of Timmy’s was seen in the area where some mailboxes were smashed.  The sister doesn’t know what to do, so she naturally turns to her brother, because he is a police officer.  What do you think the police-officer brother is going to say?  He’s going to tell his sister to tell her son to shut his mouth and not say a thing.  He’ll explain that, if Timmy confirms that he was in the area where the mailboxes were smashed, he’s going to dig himself into a hole.

Do you think that the police officer uncle is going to talk to Timmy and advise him to admit to playing mail-box derby because the police will somehow “go easy” on him?  And how, exactly, would that work out?  Do you think the police officer handling the case would call someone whose mailbox was smashed and explain that because the guy who did it, or played a part in doing it, has been cooperative, they’re not going to charge him, or otherwise plan on “going easy” on him?  Even if Timmy and his uncle both know that the police “know” Timmy laid a few hefty dents in some mailboxes, his uncle also knows that unless Timmy puts himself in the area by admitting to as much, there may not be enough other (or any) proof for Timmy to be charged.  Timmy has to resist the urge to say anything, or to “get it off his chest.”

Ask 50 lawyers how many times they’ve ever seen someone talk themselves out of trouble, and you’ll hear “never” more than 100 times over.  Back when the O.J. Simpson case dominated nighttime TV shows, you could often find panels of the very best lawyers in the country weighing in on the day’s happenings in either the criminal and/or civil trials.  One thing that astounded me was that night after night, the most expensive and successful lawyers in the United States would reiterate that they would always, and without exception, advise each and every client to remain silent and exercise his or her right to do so in any criminal proceeding, or, in a civil matter, to just answer the question they were asked, without saying anything more.  These were million dollar lawyers giving free legal advice, and despite the fact that they might not agree on anything else, there was complete and unanimous agreement on the wisdom of keeping quiet and not volunteering anything.

So how do we go from one of the most universally accepted maxims of American law to a person singing to the police like a canary?  In part, it’s probably because people feel that the police “know” what happened, and that admitting it will cause them to “go easier.”  And while there may be an exception to the idea that it’s always best to keep your mouth shut, the only person who should ever make that determination is a competent lawyer representing someone for the matter about which they’re being asked to speak.  And on top of that, if a person ever does give up his or her right to remain silent, he or she should always get something for it.  Anything a person has to say, by way of admission, is a kind of currency, and it should be spent only after his or her lawyer has negotiated something for it.  There is not and never has been an exception to this, and it is ALWAYS a mistake, otherwise, to say anything.  Ever.

There is another old maxim lawyers will advise, and that is, while in a hearing of any kind, to “just answer the question.”  This should not be taken as an insult to anyone’s intelligence, but it’s just that as humans, we almost instinctively try and “make it better.”  The problem with this is that in legal proceedings, it’s almost impossible to make anything better by offering more testimony than is necessary by simply answering a question, no matter what it is.  This, again, is why every lawyer will hire his or her own lawyer to represent him or her in a criminal or even civil case.  In the context of a driver’s license restoration hearing, for example, a person may be asked something like, “Do you attend any support groups, like AA?”  If the person does not, then a simple “no” will suffice.  I remember, however, a few years ago, I took a case for a guy who had previously tried to win his license back on his own and lost (consistent with my guarantee, I won his license back when I was hired).  As I read his denial order, I saw that when the hearing officer had asked him about AA, he went on to volunteer that he didn’t care for the people at those meeting.  He actually said it in a much stronger way than that, but it turned out that his statement was one of the reasons for his denial.  I had to help him explain this at his next hearing, the one I was hired to handle for him.  It would have been far better, that first time, if he had just said, “no” when asked if he was attending AA, but he just could not resist the urge to explain himself.  In the real world, when people talk, they just wing up talking themselves into trouble, or even more trouble than they’re already in…

On the flip side, however, I have seen plenty of cases where people have stayed quiet, (of course) to the frustration of the investigating officer or detective, and nothing further has come of it.  Look, if you feel uncomfortable telling the police you’re not going to answer any questions, then hire a lawyer to be your heavy.  I’ll do it for you.  Yet for many people reading this, it’s too late; you’ve already talked.  It happens.  Police are experts in getting people to talk.  Take your average street cop and put a good lawyer in his or her custody, and I’ll bet the cop gets the lawyer to talk almost all of the time.  Police are trained in interrogation.  This is why it’s far easier for a lawyer to speak for the client and tell the police that the person won’t be answering any questions.  For all the million dollar lawyers I mentioned before, you can also bet that if any one of them were contacted by the police, they’d hire their own counsel to shield them.  If you’ve already admitted things, then cut your losses right away and hire a good lawyer to protect you.

The takeaway here:  Shut up.  This is advice I’m rather good at providing, but, as it turns out, advice I also need to be given (and repeated) to me, as well.  I’m a talker (look at my blog; does that come a s surprise?), so I value those in my life reminding me (and I need to be reminded often) to not blab so much.  And that probably provides as good a place as any to end this article.

If you are facing a Michigan DUI or criminal charge anywhere in the Detroit area (meaning Macomb, Oakland or Wayne County), or, no matter where in the world you live, need to win back your driver’s license or need to clear a Michigan hold on your driving record, I can help.  Call my office – we’re here to help, Monday through Friday, from 8:30 a.m. until 5:00 p.m., and can be reached at 586-465-1980.  That call is confidential, so at least then, you can talk as much as you want without having to worry about it.