As Michigan DUI attorneys, my team and I answer a lot of questions from people who have been arrested for drunk driving. In this article, I want to provide answers to 4 of the most common, important, and widely applicable things we get asked. Before we get there, however, I want to make clear that answering questions is a fundamental part of what we do, and that asking questions is exactly what anyone looking for a lawyer should be doing. This is all part of the consultation process, and if done correctly, will help both the potential client and the lawyer figure out if they’re a good fit for each other. 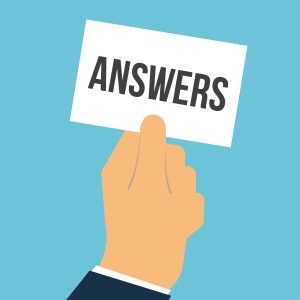 That said, the first thing a person should be looking for is a lawyer who will provide him or her with honest answers. In the world of DUI cases, it’s what you need to hear, rather than just what you want to hear, that’s most important. Of course it is basic human nature to gravitate toward things that sound “better,” but anyone facing a DUI needs to quickly become a more sophisticated consumer and really check around before he or she hands over their money to some lawyer who makes it sound like he or she has some kind of magic key to make everything just “go away.”

Moreover, any lawyer with enough confidence in him or her self (and worth hiring in the first place) should encourage a person to check around and compare Michigan DUI attorneys. I have listed 4 questions below that represent a sample of things we get asked all the time. There are other questions that regularly come up, but my goal here was to pick a handful that are among the most frequently asked, important, and that are also relevant to the broadest audience. To be sure, everyone has questions, but my goal was to discuss a few that generally applied to everyone facing a DUI.

For example, a lot of people hold an occupational or professional license of one sort or another, and my team and I field a ton of questions about if and how an OWI (Operating While Intoxicated) charge will affect it. However, a lot of other people don’t have such concerns, so this subject is not relevant to them, and is therefore something we can go over if and/or when we speak, rather than address here.

To be clear, the best way for someone facing a Michigan DUI charge to get a complete and full answer to any of his or her questions is to pick up the phone and speak with a live person. Accordingly, my team and I invite anyone looking for a lawyer for a DUI case anywhere in Wayne, Oakland, Macomb, Lapeer, Livingston, St. Clair or Washtenaw County to give us a ring.

With that in mind, let’s turn to the 4 most common and widely applicable DUI questions my team and I get asked:

The problem is that almost every time someone asks this question, they have already been arrested for a DUI, and the police have already done what they’re asking about. Accordingly, the underlying question really shifts from “can the police do that?” to something more like “was that legally proper?”

This often comes up in the context of the police having pulled someone over, or the administration of field sobriety tests.

And to boil it down further, what’s really at issue is whether the police conduct can survive a legal challenge. In other words, will a Judge rule that what the police did was so wrong that any evidence obtained as a result must be excluded?

The legal answer is that “it depends.”

The practical answer is that the court system will only exclude evidence or otherwise rule against the police (and, in a sense, side with an accused drunk driver) when there is no other choice. In the real world, a lawyer has to prove to the Judge that whatever the police did (or didn’t do) was a clear violation of the law, and that the appropriate legal remedy is to exclude certain evidence or dismiss the case entirely.

No matter what, though, DUI cases DO NOT dismiss themselves.

As Michigan DUI lawyers, we must not only know the law, we must also carefully examine every shred of the evidence, as well. Most often, what gets cases dismissed or drives really good plea bargains are small but important things found by after a diligent and thorough review of all the evidence.

In practice, there are 3 areas where most of the things that can get a DUI case – or at least some of the evidence in it – thrown out of court:

1. The traffic stop.
2. The field sobriety tests
3. The chemical (breath or blood) test.

That’s not to say there aren’t plenty of other areas where a DUI case can be compromised, but most legal challenges to the evidence or the whole case tend to involve 1 of those 3 things.

Understandably, this is probably the biggest concern for anyone facing a DUI charge. While there are no absolutes, the good news is that for the vast majority of people facing a 1st offense DUI in any of the courts of the Greater-Detroit area, meaning Wayne, Oakland, Macomb, Lapeer, Livingston, St. Clair and Washtenaw Counties, the answer is usually “no.”

Let me be clear on this point: for as much as every DUI client wants to stay out of jail, my team and I are equally concerned about making sure he or she doesn’t get locked up, either. Thus, when you hire our firm, keeping you out of jail becomes our first order of business, as well.

In 2nd (and even 3rd offense cases), there is a LOT of work that can and should be done to either avoid jail completely, or, in repeat offense cases where there is more of a risk of getting a little time, to at least make sure that it’s kept to the absolute minimum.

That’s not just talk, either, because as conscientious DUI lawyers, we always evaluate ourselves by how well we do for our clients.

After all, the whole point of hiring a lawyer for a DUI charge is to stay out of jail and avoid or minimize as many of the negative consequences and penalties as possible. Thus, and as I often point out:

That’s the standard we follow, and it means we’ll do absolutely everything humanly and legally possible to make sure our clients stay out of jail and escape as many of the other potential legal penalties from a DUI as they can.

A DUI is not cheap. I can’t help but think of late comedian Joan Rivers, and her famous line, “Can we talk?”

In that spirit, let’s be candid: this is NOT the time to start counting pennies. The whole DUI experience is going to cost you a chunk of money, even if someone else pays your legal fees (and good luck with that).

As far as lawyers go, there are 3 things you should keep in mind as you look around:

1. You will NEVER get what you don’t pay for. To keep this piece short, I have to stick to “bottom line” pronouncements, but the simple fact is that really good lawyers are never cheap. Ever.

2. HOWEVER – and on the flip side – it’s also very easy to pay top dollar for nothing more than average legal services. To the same extent that good lawyers are not cheap, it’s also true that a lot of lawyers charge premium fees for what amounts to mediocre, run-of-the-mill legal representation. Way too many lawyers severely overestimate their worth and price themselves too high.

3. To figure all this out, you’ll need to be a smart consumer and do some homework, or else you’ll just be just taking your chances. You need to read around, compare lawyers, and look for real information. For example, our firm is the ONLY one I know to publish our fees online. For my part, I have always been hesitant to do business with any company that is secretive about price, so I make sure we do the opposite of that.

Beyond lawyers and legal fees, it’s important to understand that DUI cases are really the “bread and butter” of the revenue stream for many municipalities. They are, simply put, money-makers. Some courts are very expensive, while others not so much, but no matter how you cut it, between fines and costs, legal fees, and a hike in vehicle insurance, this is going to take a bite out of your finances.

Here’s the good news: If you’re convicted for a 1st offense DUI, the answer is NO. That said, you will have some restrictions placed on your driving for a while.

In a 2nd offense case the law requires that your license be revoked upon conviction. However, there is a “workaround” to get a restricted license if a person is admitted into a Sobriety Court.

In a 3rd offense case, the licensing action will depend on whether or not a person has any prior DUI convictions within either the preceding 7 or 10 years. In addition to any immediate licensing concerns or strategies, Sobriety Court should always be considered, if it’s an option, by anyone facing a felony DUI charge.

The framework of license sanctions is rather complicated, and I would suggest that any reader interested in learning more review the articles linked above for a more detailed explanation.

Of course, these are just 4 of the most common questions; we get asked loads more, and that’s another thing that differentiates our firm: All of our consultations are free, confidential, and, best of all, done over the phone, right when you call.