In this 2-part article, we’re going to examine and explain the arraignment in Michigan criminal and DUI cases. In this first part, we’ll look more at the legal purpose of an arraignment. In the second part, we’ll dig a bit deeper into it’s function and process in the Metro-Detroit area. For my team and I, “Metro-Detroit” means the various courts located in Wayne, Oakland, Macomb, and the surrounding counties.That matters because, as we’ll see, the actual process can be quite different from one court to another. 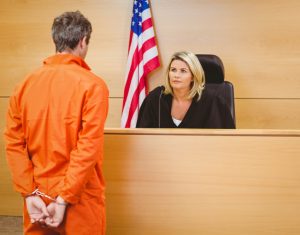 The arraignment has a long history. It has been around pretty much as long as criminal charges have been made against people in court. Black’s Law Dictionary, the most highly regarding source for legal definitions, concisely describes the arraignment as “the initial step in a criminal prosecution, whereby the defendant is brought before the court to hear the charges and to enter a plea.” While that’s historically true, it also leaves out a LOT of important and practical considerations.

To be sure, the primary purpose of an arraignment is to advise a person of the charge or charges being made against him or her. It also informs the person of the maximum legal penalty that can be imposed for each. However, in many misdemeanor cases, at least in Michigan, the arraignment can be “waived” so that one does not need to show up in court for it. More on that later. I point this out now, however, to make clear that criminal procedure has evolved a lot over the last several centuries.

Some things – like what happens at arraignments – are quite different today than they were even 20 years ago, at least here in the Metro-Detroit area. Accordingly, let’s start with the formalities. As noted above, the arraignment is the opening stage of a criminal case. An arraignment can be conducted by either a judge or a magistrate. In the Michigan court system, a person is as likely to appear before a district court magistrate as a judge for an arraignment.

Black’s law dictionary defines a magistrate as “a quasi-judicial officer given the power to set bail, accept bond, accept guilty pleas, impose sentences for traffic offense and similar offenses, and conduct informal hearings on civil infractions.” Many district courts employ one or more magistrates to handle arraignments and civil infractions. Usually, this is a part-time job, meaning that the magistrate also works in private practice as a lawyer. If a person has to appear for an in-person arraignment, the magistrate essentially fills the Judge’s role. He or she is addressed as “your honor.”

In addition to providing notice to a person of the charge or charges and the maximum penalty that can be imposed for each, the arraignment also serves several other purposes. Let’s look at some of the more important of them:

Procedurally, one of the first of those functions is for the person being charged to enter a plea. There is a lot to this, but here is the bottom line – YOU SHOULD ALWAYS PLEAD “NOT GUILTY” AT AN ARRAIGNMENT. This applies even if a person really is 100% guilty and has no viable defense. Very often, as Michigan criminal lawyers, we can negotiate a plea and/or sentence bargain. Sometimes, a we can work out a deal to keep the matter completed off of his or her record, as well.

Of course, one can also “stand mute” at the arraignment, which means he or she neither admits nor denies guilt, and the court will enter a “not guilty” verdict on his or her behalf. Some people feel weird saying “not guilty” (although they shouldn’t), so standing mute avoids that and produces the same result without them having to say anything.

The ONLY time a person should ever plead guilty is in certain misdemeanor cases, and only then under the direction of a criminal attorney who is doing so for a strategic reason. To be clear, such exceptions are about as rare as a pink unicorn, so there’s little point in discussing them any further here.

For what it’s worth, a person CANNOT plead guilty to a felony at his or her arraignment. Also, most judges and magistrates holding misdemeanor arraignment will strongly encourage a person to consult with a lawyer before accepting a guilty plea. In fact, to their credit, many simply will refuse to accept a guilty plea. This is true even if a person is facing someone like a DUI and the evidence is strong. The judge or magistrate knows that, very often, even where the evidence is beyond dispute, the lawyer can do things to protect the person and produce a much better result.

Another important function of the arraignment is that the person is advised of his or her constitutional rights. A person’s rights are absolute, and apply even if the arraignment is waived. They are listed on various versions of an official court form called an “Advice of Rights” Below are some of the most important of those rights that apply in every case, whether it’s a misdemeanor or a felony:

1. You have the right to

a. Plead guilty or not guilty or to stand mute. If you stand mute, a plea of not guilty will be entered. You may plead no contest with the permission of the court.
b. To have a trial by jury.
c. To have the assistance of an attorney.

2. You have the right to an attorney appointed at public expense if you are indigent (without money to hire an attorney) and if

a. the offense charged requires a minimum jail sentence, or
b. the court determines that it might sentence you to jail.
The appointing authority will decide if you are indigent and appoint counsel if you are eligible.

4. If you have a trial, you have the following rights:

a. To call witnesses to speak for you at trial. You may get an order signed by the court to require witnesses to come to court.
b. To see, hear, and question all witnesses against you at trial.
c. To be a witness for yourself or to remain silent. If you choose not be a witness on your own behalf, the prosecuting official may not comment on your refusal to testify.
d. To be presumed innocent unless proven guilty beyond a reasonable doubt.

As was mentioned above, the arraignment can sometimes be “waived” in misdemeanor cases, depending on the court. This requires that a person’s lawyer file papers that specifically request the waiver. It is presumed that anyone who has hired a lawyer has adequately discussed the charge(s) that have he or she will be facing, so the court will assume that has been done, and automatically enter a plea of “not guilty” for him or her.

Waiving the arraignment does NOT mean it won’t happen. Instead, in those cases where it has been waived, the arraignment will essentially be put off until the person shows up in court later. On that first court date, the judge will have the person read and sign the Advice of Rights form. Then, the person will be asked, on the record, if he or she did in fact read and review it, and if they understand their rights as set forth on it.

An arraignment cannot be waived if a person is charged with a felony.

Also, some courts won’t allow the waiver of misdemeanor arraignments under any circumstances. Others will only allow it in certain cases. We could get lost just trying to break down how this works in the various courts of the Metro-Detroit area. This is one of those things that has changed and evolved over the years. Every court has its own way of doing arraignments.

For example, many local courts used to allow a lawyer to waive arraignments in 1st offense DUI cases. Now, however, many don’t, because they want the person to show up in person. This is because they want him or her to appear so they can impose a “no drinking” order ASAP. As a condition of the bond that’s imposed, the person will be forbidden from consuming alcohol or any drugs, including recreational marijuana. In addition, he or she will be required to submit to periodic breath and/or testing to ensure that he or she complies.

This practice began as a rarity a number of years ago. Over time, it has spread among the local courts. Now, as mentioned above, many (but not all) courts forbid the waiver of the arraignment in a DUI case just so bond conditions (like no drinking and testing) can be mandated right away. The reason is that person can’t be “ordered” to do anything, or ordered to refrain from doing something (like drinking), unless such order is stated, on the court record, by either a judge or magistrate.

In felony cases, a person isn’t usually released from jail until after he or she has been arraigned. Consistent with what we’ve covered so far, the person will be notified of the charge or charges against him or her and told the maximum possible penalty for each. In addition, the judge or magistrate will advise the person of his or her rights. Sometimes, the judge will go over those rights and read them aloud, on the record. Other times, this is done by providing the “Advice of Rights” form linked and mentioned above, and having the person read and sign it.

In felony cases, the judge or magistrate will also set the bond amount (technically, the bail amount), as well as other conditions. Standard conditions of bond apply to both misdemeanor and felony cases, and include:

In addition, other conditions can be set. For example, if person is charged with having assaulted someone, then a “no contact” provision is usually added. This will prohibit the person from having either direct or even indirect contact with the alleged victim. The “no contact” order can also be extended to any members of the victim’s family, as well.

Similarly, if a person is charged with having committed an offense at a certain location, then he or she can be ordered to stay away from that place.

In most misdemeanor cases, a person will be let out of jail without having to be arranged first. Normally, he or she will be required to post what’s called an “interim bond” in order to be released from the municipal or county jail. In the vast majority of cases, that amount will be deemed sufficient by a magistrate or judge later on. In other words, it is unlikely that a person will have to post any more money for bail after his or her arraignment.

Just by way of recap, there are 5 takeaways that we covered so far, in part 1 of this article, about the arraignment:

1. It is the first step in the criminal process, although it can sometimes be waived in misdemeanor cases so that a person doesn’t have to make special trip to court for it.

2. The primary purpose is to apprise a person of the charge or charges being made against him or her, as well as the maximum possible legal penalty that can be imposed for each.

3. A person will enter a plea. It should always be “not guilty. Alternatively, he or she can simply “stand mute” and let the court enter a “not guilty” plea on his or her behalf.

We’ll stop here, and come back in part 2 to dig a little deeper into things like bond conditions and the considerations that go into setting them.