In part 1 of this article about the arraignment, we identified 5 important functions. First, we saw that the arraignment is the first step in a criminal case. Second, the person is formally notified of the charges or charges against him or her, and the maximum legal penalty that can be imposed for each. Third, he or she will enter a plea (it should always be “not guilty”). Fourth, bond (bail), and bond conditions are set. Fifth, some courts allow the arraignment to be waived in certain misdemeanor cases, but that cannot happen in a felony case. 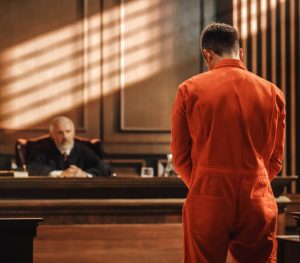 One of the scariest parts about having to show up for an arraignment occurs when the person is advised of the maximum possible penalty that can be imposed for his or her charge(s). Imagine, for example, that a person is caught with a small amount cocaine for personal use. He or she is brought to court and advised that the maximum penalty that can imposed for possession is up to 4 years in the state prison. That will cause many to have a “sinking feeling” in the pit of their stomachs.

The good news, however, is that unless you’re a serial killer, or a dyed-in-the-wool habitual criminal, the maximum possible penalty, at least as far as incarceration goes, is NOT even remotely likely. Let’s assume that the defendant in our hypothetical cocaine case is Snorting Sam. Sam is 34 years old. He had a DUI about 3 years ago, and also was convicted of MDOP (Malicious Destruction of Property) about 6 years ago, as well. He has no defense to the possession charge, so later on, as the case progresses through the system, he pleads guilty to it.

At least here in the Greater-Detroit area, meaning in the courts of Wayne, Oakland, Macomb, and the surrounding counties, doing ANY jail time would NOT be a realistic possibility for Sam, much less doing 4 year in prison. In fact, my team and I would very likely work it out so that Sam would not only stay out of jail, he’d also completely avoid having the cocaine conviction go on his record.

Even if Sam hired Lousy Larry as his lawyer, and Larry did a crap job, jail would still be highly unlikely.

The point is that the “maximum possible penalty,” at least as far as incarceration goes, does NOT mean any kind of “realistic possible penalty.” The law simply requires a person to be advised of it. This is rather similar to the advertisements for various medications on TV. At the end of the commercial, a voice will come on and quickly announce the possible side effects (“…in rare cases, serious complications including stroke or death may occur…”). The chances of those things are less one-in-ten million, but the law requires that they be disclosed.

What IS on the menu in every criminal arraignment, however, is the imposition of bond conditions. In order to remain out of jail while his or her case is pending, there are certain things a person must do, by order of the Judge. Most of the are “standard” bond conditions. For example, a person must not commit any new crimes while out on bond. Similarly, he or she is generally forbidden from leaving the state without specific permission from the court. He or she will also be required to notify the court of any change of address.

In recent years, other conditions have become standard, as well. These include a prohibition against consuming alcohol or using drugs (including recreational marijuana). This, really is where the rubber meets the road, because in order to ensure a person is complying with those orders, the judge or magistrate will almost always also require him or her to “test.” Testing means that a person must provide periodic breath and/or urine samples to show they’re staying clean.

This is probably the one aspect of being on bond a person will” feel” the most. Imagine that a person gets charged with a relatively minor criminal offense, like a suspended license(DWLS) or a DUI. Among his or her bond conditions is a “no drinking” order, backed up by a testing requirement. For the next several months, he or she can’t drink at all. To do so risks testing positive and having his or her bond revoked, meaning being put in jail. There are no exceptions to these orders, even for a small toast at a wedding, or a glass of wine with a special dinner.

Beyond not being able to drink, which in and of itself is not that big a deal (or at least shouldn’t be), there is the testing requirement, as well. To be blunt about it, having to test can be a burden. Being required to blow into a portable breath machine, or go provide a breath or urine sample at at a certain time, and at a testing center, can be a pain. This is a very real way that bond conditions handed down at the arraignment will impact a person’s life.

Here, the reader might wonder, “Well, if my arraignment can be waived, and I don’t have to go to court for it, doesn’t that mean I avoid all this?”

Waiving an arraignment doesn’t mean that bond conditions don’t get imposed; that just happens later. Instead, a waiver means that a “not guilty” plea will be automatically be entered for the person right off the bat. It is assumed that his or her lawyer will explain the nature of the charge(s) to him or her.

When a person whose arraignment has been waived shows up in court the first time, later on, he or she will almost certainly be required to read and sign the “Advice of Rights” form mentioned in part 1. The Judge will then impose bond conditions. Let’s look at a real-world example to help explain this:

Assume that Tipsy Tina is arrested for a 1st offense DUI. The court where her case is pending allows the waiver of arraignments in such cases. Her lawyer files the appropriate paperwork to do so.

About a month later, Tina must show up for her first in-person court date, called a pre-trial. Whatever else does or doesn’t happen at her drunk driving pre-trail, the Judge will make sure to speak to her on the record and will then impose bond conditions. It is a certainty, at least in any local, Greater-Detroit area court, that she will be ordered to completely refrain from consuming alcohol. In addition, she will be required to test, to some degree or other, while her case is pending.

In other words, waiving the arraignment does NOT get a person out of having bond conditions ordered. It simply delays them being imposed by a few weeks.

Although it goes beyond the scope of our inquiry here, a pre-trial is the first substantive meeting between the defense lawyer and the prosecutor. Because it happens before any kind of trial, it is called a “pre-trial.” There can be any number of pre-trial conferences. The purpose, of course, is for the parties to try and resolve the case without the need for a trial, or to at least define and limit the issues that will need to be decided.

If a person is charged with a felony at the arraignment, then he or she will return to court, for what is called a “probable cause conference” no less than 7, but no more than 14 days later. From there, the full felony court process takes over.

One could actually write a whole book about the arraignment phase of criminal cases. However, as an overview, and starting point, we’ve covered enough in this 2-part article for the reader to know what to expect. Further questions are best answered asked of and answered directly by a criminal attorney.

If you’re facing a criminal charge and looking for a lawyer, be a savvy consumer and read around. Pay attention to how different lawyers explain the law and the criminal process. Also, take note of how they explain, where relevant, their various approaches to it.

This blog is a great place to start. It is fully searchable, and updated weekly. When you’ve done enough reading, start checking around. You can learn a lot by actually speaking to a live person.

If your case is pending here, in the Greater-Detroit area (meaning Wayne, Oakland, Macomb, or the surrounding counties), make sure you give our firm a ring, as well. All of our consultations are free, confidential, and done over the phone, right when you call.