To win a Michigan driver’s license restoration case, you have to say the right things. A key purpose of every license appeal hearing is to make sure a person does just that. As busy Michigan driver’s license restoration lawyers, people frequently contact us and ask what they should say in order to win their cases. Unfortunately, this reflects a deep misunderstanding about the whole purpose of the process. It’s not just that a person has to say the right things; they must also be true. 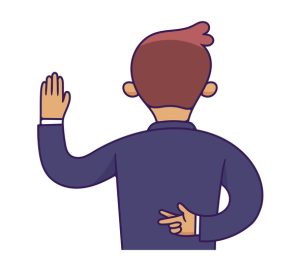 Let’s look at an obvious example. It’s contained in the all-important question, “When was the last time you consumed any alcohol?” It’s probably fair to say that most people know they’re going to be asked that question, or at least some version of it, as part of their license appeal case. Most will (correctly) assume that their answer needs to indicate that, depending on their drinking and DUI history, it’s been long enough since they last imbibed. While that’s correct, it’s only part of the story. The other part is that, as we just noted, whatever the answer, it must also be true.

This is a good a time to remind the reader of the old adage that “a little knowledge is a dangerous thing.” Merely saying that one has been alcohol-free long enough won’t win a license appeal. As we’ve noted twice already, it must also be true. However, even being true is not, by itself, enough to win a license appeal case. A person must prove his or her sobriety by what the law defines as “clear and convincing evidence.” This means that he or she basically has to step up and hit a home run.

The hearing officers who decide these cases know that people are going to come in and try to BS them. They expect that every single day. They are fully aware that people will try to say all the right things, so their job is to try and determine if they’re true of not. In other words, the hearing officers have to put everyone to the test to see if they really are sober, or are merely saying so.

Here is where things get interesting. As another old saying goes, “this is where the rubber meets the road.” The idea of simply learning what one should and shouldn’t say is strategically misguided. To win a driver’s license restoration case, a person must be able to speak convincingly (as in honestly) about his or her real-life transformation from drinker to non-drinker. Either he or she has either actually quit drinking and gotten sober – or not.

The decision to get sober is always the result of having had enough of the problems caused by it. Nobody decides to give quit drinking because it’s working out so well. Instead, people will usually try everything they can to cut down, limit, or otherwise control their alcohol intake, and only throw in the towel when (and if) they realize none of that works.

This is a really big moment in someone’s life. People in AA often describe the decision to quit as the result of having “hit bottom.” They suddenly realize that alcohol has become the common denominator to all their problems, and that the only way forward is without it.

For some, especially those who drink a lot, or more frequently, this revelation can come easier. By contrast, it’s often harder for those who don’t drink that often because it’s normal to think of a drinking problem as drinking “too much.” However, as yet another old saying goes, “anything that causes a problem IS a problem.” This is true no matter how little or rarely a person drinks.

The fact that someone doesn’t drink that often but has still racked up multiple DUI’s means that drinking is some kind of risk for him or her. And that risk, in turn, means that it’s some kind of problem, as well.

These “epiphany” moments often hit someone like a ton of bricks. Most people who get sober do so after having tried every way imaginable to manage their drinking and stop it from causing any further problems. It’s only after they realize, by repeat experience, that this doesn’t work, that they finally quit.

Indeed, just about everyone who does successfully quit drinking looks back and wishes he or she wouldn’t have waited so long. Whatever else, nobody quits drinking too soon. It’s only after the problems have piled up and made a mess of things (like losing the ability to drive) that the lucky ones figure out that they have to remove alcohol from their lives.

Some, however, just never get better, and struggle on with drinking and the problems it causes.

For as big a decision as this is, what follows is even more profound. When a person decides that “enough is enough,” and that it’s time to quit drinking, huge life changes follow. They ditch the drinking friends and learn to avoid activities that revolve around (or involve) drinking.

There is an AA saying that really captures this, and is especially relevant for those in early recovery: “Avoid wet faces and wet places.” Not surprisingly, when people think back on it with a sober mind, they realize that a LOT of what they did involved drinking.

People who embrace sobriety start to notice that life improves rather soon thereafter. Eventually, they earn back the trust and respect of those who are important. This means family and good friends who are supportive of their recovery.

Real sobriety changes every aspect of a person’s life. People begin doing positive things, like finishing up an outstanding degree, starting a new career, or doing so much better at work that they get recognized and promoted. They feel better physically and mentally.

Without fail – and without exception – sobriety really IS life-changing.

Anyone who has gone through this can explain it, at least by way of answering questions about it in the context of a license restoration appeal. A person doesn’t need to be a good speaker to do this. Even if he or she is the “quiet type,” at least when asked, they can describe the differences between life with – and without – alcohol.

Those differences, as we have noted, are profound

How, then, can someone who hasn’t experienced any of this explain it? Even if a person studied every facet of recovery, and managed to read every word ever written about it, that’s fundamentally different from actually having experienced it. Put another way, a person can “say” all the right things, but unless he or she really has quit drinking, there will be something important (and deeply personal) missing in his or her account.

The Michigan Secretary of State hearing officers know this. My team and I know this, as well. Because we guarantee to win every license restoration and clearance appeal case we take, we carefully screen each potential client to make sure they really are sober. We can tell (one might say “smell”) the difference between someone who has really had enough and decided to quit drinking from someone who is just saying so.

We know a person isn’t sober when he or she says something like, “I can say whatever you need me to,” or “Just tell me what I should say.” Of course, our firm is in business to make money, and we don’t do that by turning people away. However, we don’t take cases for people who haven’t honestly quit drinking, either. Anyone who thinks otherwise will soon find out that our integrity is not for sale.

For as honest as we are, though, our guarantee acts as a 2-way safeguard: One one hand, it protects the client from risking his or her money, because they’ll only pay us once and then WILL get his or her license back.

On the other hand, it protects us from taking any license appeal case that can’t win, lest we get stuck losing, and then finding ourselves obligated to do the whole thing all over again, for free. Given that sobriety is the very foundation needed to win a license appeal, if person isn’t really sober in the first place, it won’t matter how many times he or she appeals.

To be sure, my team and I know exactly what a person does have to say to win. The catch, though, as I’ve pointed out several times before, is that it must be true. Anyone who wants to try and BS their way through the license appeal process is almost certainly going to lose, and won’t get any help from us.

On the flip side, though, as long as someone really has quit drinking and it otherwise eligible, we can win his or her case – guaranteed.

If you’re looking for a lawyer to win back your license or obtain the clearance of a Michigan hold on your driving record so that you can get a license in another state, be a wise consumer and read around. Pay attention to how different lawyers break down the license appeal process, and how they explain their various approaches to it.

This blog is a great place to start. It is fully searchable and is updated weekly. I have written and published over 660 articles (to-date) in the driver’s license restoration section. There is more useful information to be found there than any and everywhere else combined, but don’t take my word for it. Look around for yourself.

When you’ve done enough reading, start checking around. You can learn a lot by speaking with a live person. When you’re ready to talk, give our office a ring. Our firm can handle your case no matter where you live.