To keep this subject at the top of the heap, I find it necessary to regularly write and post about the “no drinking” requirement to win a Michigan driver’s license restoration or clearance case. An email that recently came into our office illustrates why this is so, and to help make my point in this article, I’ll reprint it below. However, before we get to that, let’s first go over what a person must do – and prove – to win a license appeal. 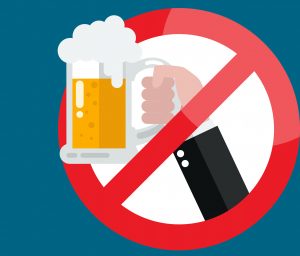 Under Michigan law, the only way a  person who has had his or her license revoked for multiple DUI’s can get it back is by filing and then winning a formal driver’s license restoration appeal with the Michigan Secretary of State after he or she becomes eligible. To succeed, a person must prove 2 things, by what the law defines as clear and convincing evidence: First, that his or her alcohol problem is “under control,” and, second, that it is “likely to remain under control.” Let’s look at what that actually means:

In the context of a license appeal, a drinking problem is considered “under control” when a person has been completely abstinent from alcohol for a legally sufficient period of time. In our office, we generally require at least 18 months of sober time before we’ll move forward with a license reinstatement case. An alcohol problem is considered “likely to remain under control” when a person can demonstrate both the ability and the commitment to remain alcohol-free (and drug-free) for life.

These rules makes sense when considered in light of Michigan’s DUI laws, as they not only mandate the revocation of a driver’s license for anyone who is convicted of 2 DUI’s within 7 years (or 3 DUI’s within 10 years), but also automatically categorize him or her as a “habitual alcohol offender” upon conviction for any 2nd or 3rd offense.

A consequence of being categorized as a “habitual alcohol offender” is that any such person is legally presumed to have a drinking problem.

In other words, it is automatically assumed that everyone who has to file a license reinstatement appeal after losing his or her license for multiple DUI’s has some kind of problem with alcohol.

Beyond everything else, the state sees each of these people as a proven risk to get behind the wheel after he or she has been drinking.

By contrast, people who do not drink alcohol are exactly ZERO risk to drive drunk.

Therefore, the MAIN goal of the license appeal process is to screen for and find those people who can really prove both that they’ve been alcohol free long enough and who have the ability and commitment to remain alcohol-free for good.

These are the only people who will win a license appeal case.

Remember, the main thing about license appeals is that a person must prove that he or she is a safe bet to never drink again.

Thus, a license appeal is about drinking, or, more specifically, about NOT drinking.

With that as our backdrop, let’s look at the email that really inspired this article. It is short, and I have redacted any personally identifying information from it (I’m deliberately obscuring his/her gender), and have also cut out and changed a few words, noted in [brackets] that could otherwise “identify” the writer.

To be clear, these edits do NOT change either the point of the inquiry, or the circumstances underlying the writer’s situation:

You have received a new message from your site www.randalawyers.com

Message: I went to a [gathering] and drank for the first time in [number of] years and failed my… interlock device… can you help me with an appeal?

This is EXACTLY the kind of situation the Michigan Secretary of State hopes to avoid by making people go through the license appeal process in the first place.

If this person winds up appealing his or her ignition interlock violation, the hearing officer is not only going to deny him/her (thereby upholding the re-revocation of the person’s license), but will also wonder what was missed when his/her case was originally considered.

Unfortunately, this person is screwed – royally.

Our firm wouldn’t take the case because the only way to win it would be to have the person deny drinking (which would be a lie), and thereby perjure him or her self.

Not that any such tactic would work, anyway; the hearing officers are experts at spotting BS.

When we spoke, this person told us that he/she called the lawyer that won his/her case the first time, informed that lawyer about what happened, and was asked by that attorney what he/she wanted to say, suggesting (or so we were told) that those choices included the person lying about drinking and saying that he/she ate something that caused the positive test result, or otherwise used mouthwash, or even cologne.

My team and I do not and would never do that kind of stuff.

We have a solid reputation for being people of integrity. A good reputation takes a lifetime to build and sustain, but only takes one stupid action to ruin. We would never consider knowingly let a client take an oath to tell the truth, and then go ahead and testify falsely, no matter how much they were willing to pay.

Thankfully, this person also indicated that he/she was very uncomfortable with any suggestion that he/she lie under oath, and, after talking to his/her first lawyer, decided to call around and speak with other lawyers, and that brought him/her to us.

For our part, we were clear that the simple reality was that by drinking, he/she had essentially shot him/her self in the foot.

Unlike a criminal case, where a person can sit silently and doesn’t have to prove anything, in license appeal cases, the burden of proof is ALWAYS on the person who wants to drive.

Thus, if a person is violated for a positive breath test, then he or she must not only contest the result, but also prove to the hearing officer that it was wrong, and the he or she had NOT been drinking.

Obviously, in the case above, the writer had already informed us that he/she drank, so there was no way we could prepare a defense that claimed otherwise, and/or otherwise sit next to the person if he/she did testify falsely.

This means, then, that if anyone in an interlock violation situation like this person admits to, or is otherwise found to have been drinking, then his or her violation will be upheld, and their license will remain revoked.

However – and this gets to the main point of this article – the real issue is much deeper than that, because although the question in a positive alcohol test result violation is whether the person drank or not, the answer to that goes right to the strength of his or her sobriety.

Taking a step back, we need to remember that the only way a person winds up on an interlock in the first place is by winning a license restoration case after having previously convinced a hearing officer that he or she was a safe bet to never drink again.

No matter how you cut it, a pretty substantial leap of faith is required to give a license back to someone who, after having lost it for multiple DUI’s, then comes forward and says what amounts to “trust me, I not a risk to ever drink and drive again – because I will never drink again.”

Thus, the reader can imagine when someone convinces the hearing officer to trust them, and, within that first year, and while on the interlock, goes and then does the ONE THING the state fears most – drinks – he or she can forget about having a license again for a long time.

As Michigan driver’s license restoration lawyers whose practice focuses on DUI and license appeal matters, my team and I spend all day, everyday, dealing with cases arising from drinking, or with cases that require proving a person has quit drinking.

I have to remind myself, sometimes, that for as important as proving sobriety is to winning a license appeal, unless somebody earns their living in this field, they’re unlikely to fully appreciate the true depth of this.

It’s easy to understand why very person who loses their license for multiple DUI’s wants to get it back.

The hard part is that, in the real world, most of them can’t win a license appeal because they’re still drinking.

That’s not their fault, because statistically speaking (and as we’ve seen), most people who have a problem with alcohol never get over it.

Moreover, the state is only interested in considering license appeals someone who is genuinely sober, and has quit drinking for themselves – not just to get his or her license back.

Because we are driver’s license restoration lawyers, sobriety is everything to us.

To everyone else, it’s something they (hopefully) find out about when they start looking for information about the license appeal process.

Therefore, I have to keep circling back to this topic – the idea that you must be done with drinking in order to win a license appeal – all the time.

As the email that inspired this piece makes clear, the fact that the Secretary of State has to be as sure as possible that a person is a safe bet to never drink again is based upon legitimate concerns and real-world experience.

If you are looking for a lawyer to win back your Michigan driver’s license, or win the clearance of a Michigan “hold” on your driving record so that you can get a license in another state, or even to fight an ignition interlock violation, be a wise consumer and do your homework.

Read around and see how other lawyers explain the license appeal process, and how they explain their approach to it. When you’ve done enough of that, start checking around. Nothing beats actually speaking with a live person, so make sure to do that.

No matter where you live, our firm can help. All of our consultations are free, confidential, and done over the phone, right when you call. My team and I are very friendly people who will be glad to answer your questions, explain things, and even compare notes with anything some other lawyer has told you.