I have written a number of previous articles about the joy of winning a Michigan driver’s license restoration case and getting back on the road, and the incomparable job satisfaction my team and I get in helping people do that. Of course, this is how we earn our livings, but, at least in the legal world, I can’t imagine that any other practice area that gets the kind of heartfelt “thank you’s” we get. Our clients are people who have worked hard to get sober, and have really earned back the privilege to drive again. This article was inspired by one such recent experience. 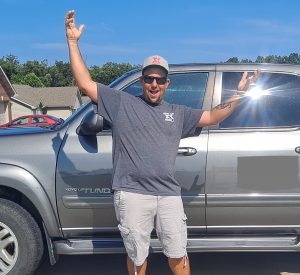 The picture you see here is of our actual client, who sent it along with his “thank you” email, and told us to use it on our site or blog (I obscured the company logo on the side of his truck). With the exception of one sentence I took out about him having posting posted a positive review of our firm, what follows are the exact words from that email: “I am so happy and grateful for your law firm! You guys did an amazing job on my case and I am already on the road and driving! Thank you for everything, this is just the beginning of my journey in my new life and I appreciate your efforts!”

As I do with many clients who express their gratitude, I reminded him that, while we appreciate his kind words, there is a lot to winning a license appeal, and even though my team and I did our part, he did all the “heavy lifting” by getting sober in the first place. Although we do get plenty of “thank you’s,” some thank you cards, and even gifts (like flowers for the staff) from happy clients who have had their driving privileges reinstated, this is the first time someone has actually sent a picture of themselves. This one really captures our client’s happiness at having won his case.

I also wanted to use this rather special “thank you” as an opportunity to point out the strong connection between the elation someone feels when the Michigan Secretary of State informs them that they’ve won, and the underlying sobriety required to do that. This goes a lot deeper than the foundational idea that you must be sober to win a license appeal, and really strikes at the heart of how genuine sobriety transforms a person into someone who is determined, grateful, motivated, and otherwise very different from who he or she was at the end of their drinking career.

Because our firm concentrates in Michigan driver’s license restoration and clearance appeal cases, we get a LOT of calls and emails inquiring about the process. Although it goes with the territory, one of the more frustrating things for me is that, despite how much effort I put into these articles (I have written and published over 600 restoration articles as of this writing), some people merely see the sheer volume of information we have online, look no further, and then contact us, explaining how long it has been since they’ve had a license, or how much they need to drive.

There’s a significant irony here, of course, because anyone who has read this far is quite the opposite of what I’m talking about.

At any rate, among those who don’t really read anything on this blog, or our website, and just “cold call” us, some get frustrated when we explain that sobriety is THE key requirement to win a license appeal.

One of the more common responses from those who are still drinking is something like, “That’s bull$hit!”

This kind of behavior is inconsistent with the fact that sobriety really changes people, and mellows them out. Whatever else, people who have quit drinking and become sober generally don’t talk like that, at least to strangers. It’s understandable that someone may find the license appeal process a bit daunting, but anyone who has put in the effort to get sober is obviously not afraid of a little hard work, especially when it comes to something as important as winning back his or her driver’s license.

Often, as we explain the license appeal process to people, my team and I have to point out that we don’t make the rules. Because our firm guarantees to win every driver’s license restoration and clearance appeal case we take, however, we really have to know how to work within those rules, and we do.

And to be clear, nobody in our firm has any disagreement with the requirement that a person must be sober to win a driver’s license appeal. Sobriety is, of course, the foundation of every license restoration or clearance case, and is written into the law along with a whole bunch of other legal requirements.

As a preliminary matter, it is helpful to understand that, in Michigan, anyone convicted of 2 DUI’s within 7 years, or 3 DUI’s within 10 years is legally classified as a “habitual alcohol offender.”

A critical implication of that is that every such person is legally presumed to have a drinking problem (and that, in turn, explains why his or her license will be automatically revoked upon that 2nd or 3rd conviction).

The upshot of this is that anyone who has to file an appeal to restore his or her driver’s license, or to remove a Michigan hold from his or her driving record as a result of any such revocation, starts out with that presumption that he or she does, in fact, have a drinking problem.

In order to win a Michigan Secretary of State driver’s license restoration appeal, a person has to rebut (overcome) this presumption and prove, by what is specified as “clear and convincing evidence,” the following 2 key things:

First, that his or her alcohol problem is “under control.” This means that he or she has quit drinking and has been completely alcohol free for a legally sufficient period of time.

Although the exact period can vary from case to case, in our office, we generally requires a person to have been completely abstinent from alcohol for at least 18 months before we’ll proceed with a case.

Second – and this is really the “main thing” in every license reinstatement case – a person must also prove that his or her alcohol problem is “likely to remain under control.” This requires demonstrating that one has both the ability and the commitment to never drink again.

In other words, a person must demonstrate that he or she is a safe bet to remain sober for life.

Being sober, and even being firmly committed to sobriety is not the same thing being able to prove it, however.

The state, through its laws, has long ago decided that it has no desire to take any chances by putting someone back on the road who poses any risk to drive drunk again.

To be as sure as possible that doesn’t happen, the whole license appeal process essential boils down to taking the sure bet, and that is that people who do NOT drink at all are exactly ZERO risk to ever drive drunk.

In other words, the Michigan Secretary of State is never going to screw around with anyone who even thinks he or she can ever drink again. Thus, to win a license appeal, a person must not only be sober, and actually be living a sober lifestyle, he or she must also prove it by what the law specifies as “clear and convincing evidence.”

This is a high bar, but when a person is genuinely sober, it’s one that can be cleared with the right legal help, like our firm provides.

For many of the people who have lost their license after multiple DUI’s and then embraced recovery, getting their license back is often the last piece of the puzzle to be put back into place in their lives. When this happens, it’s like the proverbial “cherry on top.”

I know that professionals like divorce lawyers and funeral directors serve an important purpose, and I’m sure they have ways of deriving job satisfaction, but I’m also sure that they never get the kind of happy and effusive “thank you” cards and emails that we get. Being able to share in someone’s joy like this, and knowing that you helped them do that, at least in some way, is a true gift, and my team and I are grateful for it.

This isn’t just some kind of marketing BS – this kind of gratitude really does keep us going, and it even gives us resolve when someone who isn’t sober contacts us, gets mad when they find out that they can’t get a license if they’e still drinking, and then slams the phone down while yelling “This is bull$hit!”

This is more than just about “winning.” For us, winning is a given. As noted, we guarantee to win every restoration and clearance case we take, so we not only expect to win, we literally count on it.

Instead, it’s about watching someone who has transformed their life earn back something as important as the ability to drive again. It’s about helping a person who deserves to become independent and move forward actually do it. Our clients understand how critical it is to finally become self-sufficient again, so for us, those heartfelt “thank you’s” mean everything.

If you’re looking for a lawyer to win back your driver’s license or clear a Michigan hold on your driving record so that you can get a license in another state, be a wise consumer and read around. Pay attention to how different lawyers explain the license appeal process, and how they explain their various approaches to it.

Once you’ve done enough of that, start checking around. You can learn a lot by speaking with a live person.

Our firm can handle any Michigan restoration or clearance appeal no matter where you live. All of our consultations are free, confidential, and done over the phone, right when you call. My team and I are very friendly people who will be glad to answer your questions, explain things, and even compare notes with anything some other lawyer has told you.