For most people who win back their Michigan driver’s license (or a clearance of Michigan’s hold on their driving record), getting back on the road represents putting the last piece of the puzzle back into a fully rebuilt life.  In that sense, restoration of your driver’s license goes hand in hand with the restoration of your life.  Given that the real meat and potatoes of a driver’s license appeal is demonstrating that you are a safe bet to never drink again, this whole “last piece of the puzzle” stuff has some real evidentiary importance to it, as well.  It requires a deep commitment and profound life changes to first decide to quit drinking, and then to stay quit.  There is no one who will report that life today, as a non-drinker, looks much like it did back when you were drinking.  A lot of times, those people who focus too much on the whole “I need a license” thing are those who did not spend enough time caught up in getting sober, and this usually marks a clear distinction between those who just want to win and those who have what it takes to actually win. 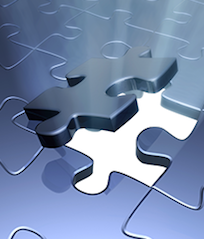 , of course, is the key.  The journey to sobriety is a truly humbling and difficult ride.  There is no way to fake it, meaning both the experiences of claiming one’s sobriety and the joy of living it thereafter, although as the hearing officers in the Michigan Secretary of State’s Administrative Hearing Section (AHS) know all-to-well, there is also no shortage of people who will try.  Amongst the lot of pretenders and scammers are also those who really think, at least at the moment, that they are sober; the sworn-to-quit and those afraid to pick up again.  These people may have quit drinking, but they have not begun to really get sober.  Conspicuously lacking in all of their stories, yet uniquely present in the “last piece of the puzzle” reports, is how obtaining and maintaining sobriety became, to the exclusion of all other pursuits, job number one in such a profound way as to eclipse even the inconvenience of not being able to drive.  As poetically as this can be described, you either get it, or not.  The same, by extension, will hold true for the outcome of your appeal to get your driver’s license back.

This distinction often shows up most vividly in the differences between the story told by an honestly sober person going through the license appeal process and the information provided by the writers of his or her letters of support.  Well-intentioned friends or family will often skip over (and may not be intimately familiar with) the details of a person’s labors to get sober or efforts at remaining so, and then go on to explain how tough it has been for him or her to function without a driver’s license, and how he or she “deserves” it back.  Given that the SOLE discretion to make that decision rests with the hearing officer, I normally advise the letter writers (usually by revising their letters with my red pen) to cull some of these opinion statements and focus more on the facts of how the person has remained alcohol-free, and since when.  By contrast, the subject of these letters will often speak very little of his or her struggles to get around, focusing instead (and somewhat ironically, considering that they’ve had no ability to drive for the last however many years) on how much better life is now, without alcohol, than it was back in the day.  This is not a bad contrast in the evidence, but rather part of that greater imperfection that is always present in stores that are true.

I cannot count how many times I’ve walked out of a hearing room with my client and heard the relief in his or her voice, as nervousness dissipates, and he or she explains, often with great emotion, how much time and effort has gone into getting to this point.  I can’t even take credit for the phrase “last piece of the puzzle,” because it just seems to come to people naturally as they talk about their recovery journey and things like the amends they’ve made and how much different things are in their lives now, as non-drinkers.  This is the kind of stuff that cannot be faked, and those people who intuitively describe getting their license back as “the last piece of the puzzle” are the real deal.  It is this fleeting “essence,” this trace evidence of sobriety, that I have to capture and bottle and then present in the broader context of the appeal itself and the specific setting of the license reinstatement hearing.  I think that I’m rather good at it, but no matter how skillful I may be, there is nothing to capture if there is none of that “essence” in the first place.  Sobriety, of course, is the key (sound familiar?).

On my website, I address when a person is legally eligible to file a license appeal, and in some of my blog articles, I further examine the distinction between mere legal eligibility to file, and being really able, as in evidence-ready, to win a license restoration or clearance case.  Here again, this concept of “last piece of the puzzle” comes into play.  Most sober people realized, in a moment that is often, in retrospect, described an “epiphany,” that they can and will never drink again.  For some, this moment comes after many false starts and broken promises, while for a few, there was never such a thought before.  A decision to stop drinking, however, almost always comes after one has messed things up quite a bit.  Quitting drinking is the first order of getting sober, but the two things are not synonymous.  Sobriety necessarily includes abstinence, but abstinence, by itself, does not necessarily include sobriety.  Getting sober, whether one follows AA or not, invariably involves making some amends, avoiding, as the AA people say, “wet faces and wet places,” and otherwise changing just about every facet of your life.  If you think of life as a puzzle, and even if you lead what you consider “the simple life,” it would probably be more like one of those 2000-piece jobs, although some people are luckier and have lives more like the easy-peasy 500-piece small box specials meant for beginners and children.  It takes a lot of work to correctly put 499 pieces together, much less 1999.  That last piece comes, how ever many had to be laid in place before, as the result of a lot of time and effort.

It is not an unusual story, often repeated in my conference room, that when a person sat in the jail cell after his or her last DUI arrest, they knew they were done drinking.  This may be the starting point for a person to adopt a sober lifestyle, but the changeover to that lifestyle comes down the road, and is really a journey more than a destination.  There are a lot of changes to make; some require thought, and others just happen, but these are all pieces of the recovery puzzle.  Winning a clearance of a Michigan hold on your driving record or winning back your Michigan license usually comes as that last piece.  This isn’t the order prescribed by the state, it’s just the way things happen in real life.  Along the way, as one travels the path to recovery, drinking friends are ditched, or just fall to the wayside, new activities and hobbies are found, relationships are repaired, better jobs or opportunities are pursued, degrees get earned, as, usually, does more money, if only because we’re no longer blowing it on fines and lawyers (ouch!) and such.

It is not wrong to wonder early on about your license.  Nor, for that matter, is it wrong to inquire about getting it back.  Some people put the puzzle together much faster than others; this isn’t a matter of talent as it is luck and circumstance.  The point is that when the puzzle is almost complete, you see the big picture.  We often talk about the “big picture.”  In the context of a driver’s license appeal, the big picture is that the state is never willing to put someone back behind the wheel who might drink and drive again, and since anyone who has lost his or her license for multiple DUI’s is a proven bad risk to do just that, it is believed that the safest way to insure that won’t happen is to only return licenses to those who are a demonstrably safe bet to never drink again.  People who don’t drink are not a risk to drink and drive.

The state, for its part, won’t bother with anyone who tries to explain that he or she can have a drink every now and then, or at least partake in a celebratory toast.  And for anyone insists that he or she can and does drink responsibly, the cold truth is that, well, you’re out in the cold.  Part of the deal for getting multiple DUI’s is that you are seen as having a problem, and, as we’ve just noted, to really keep things safe, only committed non-drinkers will ever win a driver’s license restoration case.  That’s just the way it is.  Moreover, when you contrast the stories of the “last piece” people with those whose social orbits still involve drinking, to whatever degree, that you really appreciate the huge and rather obvious difference in risk.  And even if you don’t, the state does, and that’s all that matters, anyway.

I only undertake representation of the truly sober.  My clients are all “last piece” people.  In return for requiring genuine sobriety, I provide a guarantee to win back your license.  I have no intention of having to honor my guarantee because I have every intention to win each case the first time around.  Of course, I stand by my word, but I make my money winning that first time, meaning I am as invested in a successful outcome as my client is hopeful of the same.

If you’re genuinely sober and want to win your license back, call me.  If you’re not yet sober, call me anyway, not so that I’ll take your case (I won’t), but perhaps I can help you tip the scales in favor of not drinking anymore.  I do all of my consultation stuff over the phone, and my office can be reached Monday through Friday, from 8:30 a.m. until 5:00 p.m., at 586-465-1980.  We’re here to help.